On Tuesday afternoon, an anonymous man was forcefully dragged out of Nyayo National Stadium for heckling amid a Eulogy by Baringo Senator Gideon Moi.

The man has been identified as 30-Year-Old Daniel Wekesa from Bungoma County.

Daniel, who currently resides in Mlolongo, was seen shouting while standing on his seat.

After his arrest, he revealed that he was not shouting at Gideon Moi, but rather, he had a message for President Uhuru Kenyatta.

Upon interrogation by police officers, the accused said that he wanted to request the president to give him a job.

However, Daniel’s alleged cry for employment fell on deaf ears as police officers took him to Langata Police station for further interrogation. 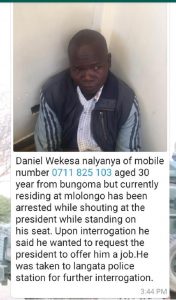 In December 2019, another job seeker was arrested after blocking the president’s motorcade to beg for a job.

Uvinalies Nyabuto, obstructed the convoy while displaying a placard bearing a request to join the defence forces.

The man was immediately arrested by the Presidential Escort Unit who then confiscated the placard.