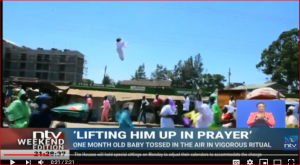 Kenyan pastor and his congregates have found themselves on the headlines after a video of them throwing up newly born infant in prayers surfaced online.

This strong ritual is shared by the African Traditional Church members called Rabbi, a newly born infant is tossed up in the sky by women followed by men as they lift the infant up in songs and prayers as an introduction to the world.

According to Pastor George Omondi Andeko, the vigorous ritual, which is done to a first male child is meant to cast out fear as they grows up.

Pastor Omondi went on to say that once a child is born, he/she is not allowed to get outside until 33 days, the mother of the baby is also isolated. 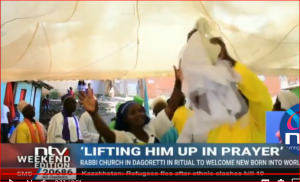 It’s also forbidden for husband and wife to sleep in the same room.

Once in the church, the infant is held upside down and handed to the pastor to continue with the prayers.

However, this vigorous ritual has caused stirred with netizens condemning the barbaric practice while others calling for the closure of the church.

Here are some comments from irate netizens.

Orega Benta See how one person can brainwash a whole generation! This has nothing to do with biblical teachings. Shenzi kabisa! I was literally holding my heart for that kid!
Saendy Nee-far Very traumatizing especially to a normal parent, can’t imagine my child going through that, what of the baby’s brain?no damages?
Ngige W. Ketziah These people should be subjected to the same torture, guess their brain wasted if they underwent the same, they are out of their mind
Emily Lazarus Somethings needs to be prohibited by the law. They may be genuinely doing it as a thanksgiving celebration but they are oblivious of the dangers associated with the same towards the kid. Little knowledge is very dangerous.
Eric George How is this allowed? That baby could have brain damage or broken limbs by the time that so called ritual is done. I appreciate freedom to worship but this one should be looked into by ministry of health.
Hellen Atolwa Primitive behaviors. The sculp of that baby is still very fragile, the fontanel are not yet fully developed, they are causing a great trauma in his brain, this baby can suffer Brain hemorrhage. Are this people serious???? Ooh God.
Florence Lowe This is very sad. I hope the baby is alright after all that shaking and throwing. This is a dangerous act that can cause bleeding to the brain with a fatal outcome especially in babies.

Worshipers of an African Traditional Church called Rabbi numerously and vigorously threw up a one month old baby for hours in order to introduce the newly born infant into the society.#NTVWeekendEdition