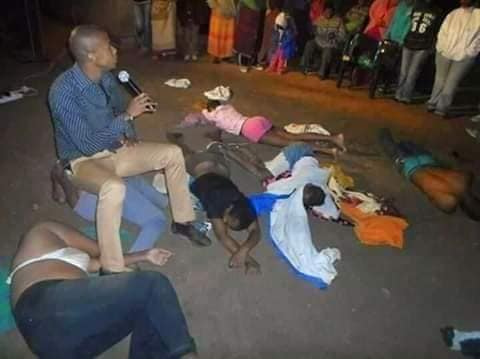 In the wake of controversial pastors, most of them focus on remaining relevant and this pushes them to do the unexpected.Although some would explain the rise of fake pastors as one of the end time signs others simply get offended by church members who lack a good sense of judgement and end up remaining loyal to false prophets.

A city pastor has shocked many after photos of him in the presence of half-naked church members emerged.  In the photos that went viral, several people are seen lying on the ground with clothes all over the place.

The pastor is also spotted sitting on a church member and in another photo he steps on them. According to some social media sources, the pastor had asked the church members to remove their clothes so that the holy spirit can easily penetrate them.

These photos have sparked a huge debate online with many criticizing the pastor for his actions.

Check out some of the reactions.

Nderitu Wa Gichuki We are slaves of our own actions.

Lopuo Lochenia The Lord is coming soon, this is characteristics of end times according to the Bible

Beverley Salmon Pastor you a devil from hell

Paul Mutiso People should blame themselves. You have eyes and you don’t see. You have ears and you don’t hear. You have brains, but you allow it to be brainwashed. Read the word for yourself and you will not be mislead the evil doctrines.

Benard Kalli And thoxe who attend churches with thr parents what happen to them?