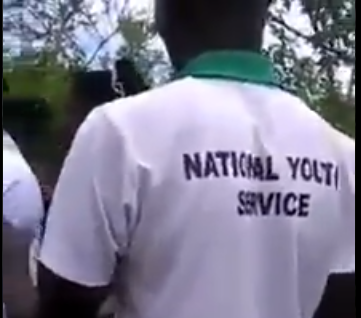 Kenyans have today been shocked by a video of NYS officials who were seemingly harassing a couple.In the video, men in the Kenyan NYS uniform are spotted asking a couple to kiss in public and even heard warning that they should do it in line with the instructions.

Apparently, the couple might have been caught sharing an intimate moment before they were forced to

The men who are believed to be NYS officials are also heard telling the man that they can do better than him if he fails to show some love to the woman by kissing.

The unidentified couple complies to the orders and exchange saliva in the presence of the men in NYS uniform.

From the conversation in the video, the NYS also mention that they are willing to let the couple go only if they all agree that they have done it as per their expectation.

It is, however, unclear whether this video is from a recent incident or not. Have a look

This is ashaming,its true such things do happen….the guys forcing them to do that are the soo called ”leaders SS2s” too bad aki

mungabenard@BenardmungaThis NYS goons need to be arrested…..shame on you. Is this what you are trained to do???

Is this what NYS are trained to do? 🤭 pic.twitter.com/ORxbocsblm