A police officer is fighting for his life at Murang’a County Referral Hospital after he was attacked by unknown people who made away with his pistol.

Constable Morris Mwiti was hit with a blunt object as he was manning Murang’a –Sagana road at Kabuta area on Wednesday evening by three assailants who emerged from a nearby thicket.

Mwiti was hit on his head as the other officer Caroline Njagi ran for her safety after she witnessed the attack.

In what has been described as unknown revenge mission, the three men who were walking along the abandoned railway line hit him severally fracturing his left fore head and the jaw. 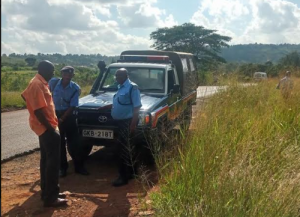 The attackers, he noted managed to steal the pistol which was loaded with 15 rounds of ammunition.

The injured officer was rushed to hospital where he is recuperating with the commander saying he is responding well to treatment.

Muasya noted said the assailants escaped using a motorcycle that was hidden in nearby thicket towards Murang’a town adding that police have launched manhunt especially to recover the pistol.

“It’s true my officers were attacked along Murang’a – Sagana Road and police are on the move to narrow down to the three criminals and I urge the public to give out any helpful tip that can help us arrest them.”