New Agriculture Cabinet Secretary Peter Munya has revealed that lack of effective pesticides is hindering elimination of insects through spraying. This is as 6,000 litres were to be delivered today.

Speaking at his first press conference since appointment, Munya said the government is in control and the locust problem will soon end.

The CS in a charged mission flew to Isiolo to inspect the locust invasion. He reportedly met with team formed by four counties (Isiolo, Meru, Laikipia and Samburu) to eradicate desert locusts.

Kericho Governor Prof Paul Chepkwony has advised the Ministry of Agriculture against spraying the locusts using conventional insecticides stating that the method will wipe out a large population of locusts and other insects which will lead to ecological imbalance.

Chepkwony says they need to spray the vegetation with locust feeding deterrents (anti-feedant chemicals) which deter the locusts from feeding on the vegetation without killing the locusts which will starve to death in the long run.
“We should avoid creating a major calamity by solving a Minor Problem,” he warns.

Prof. Chepkwony is a PhD holder in Organic Chemistry and has served at Moi University for over 18 years before joining politics. He is also an inventor and innovator with 43 publications in referred journals and 13 patents to his name. 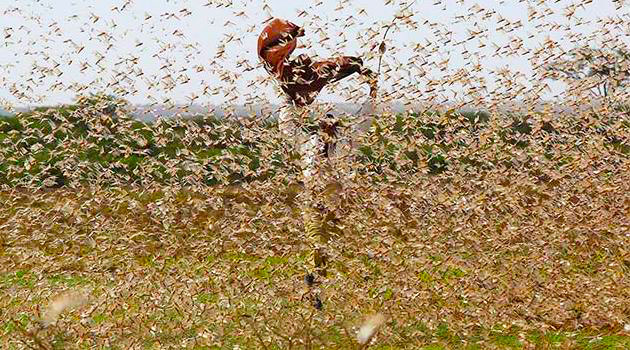 Treasury has released Sh30 million to help fight the locust menace which is now  experienced in eight counties.

The locust started crossing the border of Ethiopia and Somalia into Kenya late last month. They have so far invaded eight counties of Mandera, Wajir, Marsabit, Garissa, Isiolo, Meru, Samburu and Laikipia.

There are no figures yet on the amount of destruction the locusts have occasioned in Kenya so far, but they have destroyed 175,000 acres of farmland in Somalia and Ethiopia according to the Food and Agriculture Organisation (FAO).