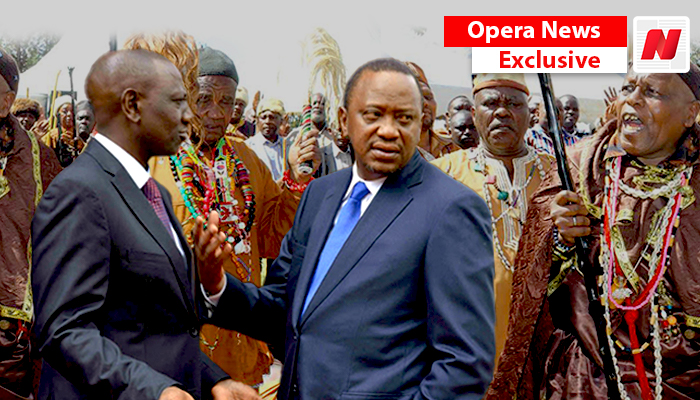 The question on whether Mt Kenya region will drum up support for the DP William Ruto’s 2022 candidature now hangs in the balance after the Kikuyu Council of Elders called off the deal with Kalenjin Community.

The council declared total support for the handshake between President Uhuru Kenyatta and former Prime Minister Raila Odinga saying it has brought tangible benefits and peace to millions of Kenyans, as well as, reduced ethnic tensions.

The Council’s national chairman, Wachira Kiago, in an exclusive interview with Opera News, says that there is no debt to be paid as anyone can lead the country.

Wachira stated that the issue of Ruto’s candidature had destabilised the community through the division of leaders either allied to Tanga tanga or Kieleweke squad.

“We have no deal with Ruto or the Kalenjin Community or his lieutenants, the issue of 2022 must be closed. If we talk of a political debt, everyone can claim it from us (Kikuyu). Kalonzo, Raila, Mudavadi among others have supported us before and they don’t claim, why is it that the DP is claiming?” Wachira posed.

The Kalenjin community had earlier asked the Kikuyu elders to clarify their stance and not disown them.

Wachira claims that Bahati MP Kimani Ngunjiri, a close ally of the DP, has been pushing the agenda of paying the debt. Recently, the MP allegedly took about 4000 members of Kiama Kiama to Ruto’s residence and chatted on how to broker Ruto’s entry into the Mt Kenya region.

MP Kimani Ngunjiri (Chairman of Kikuyu Community in Rift Valley) and his vice-chair, Joseph Wainaina, are accused of running away with Ksh8 million distributed to reimburse transport costs for the over 4,000 Kikuyu leaders who attended the meeting about fostering peace.

However, several leaders alleged that less than Ksh1 million was shared and the organizers disappeared with the rest. An attempt to reach the MP were futile as he neither received our call nor replied to messages by the time of publishing the story.

The anti-Ruto sentiment in the Mt Kenya region has gained momentum since Uhuru shook hands and signed a unity pact with Odinga on March 9.

Wachira states that the truce is credited with returning calm to the country as the Kikuyu community in Nyanza and other regions are living a peaceful life.

Wachira Kiago has, therefore, warned Central Kenya politicians against disrespecting Uhuru and dividing the community while pushing for their interests.

He added that the head of state should come out and visit the people noting that this would help to heal and give hope to those who seem forsaken.

“We are planning to summon MPs who are causing tension in the community, also we have reached out to the president and we are looking forward to meeting him to discuss how we can end the stalemate, but he must be respected,“ he notes.

Former Kiambu Governor William Kabogo has also called on the leaders to stick together and spread peace.

“Let’s focus on the big agenda of the community rather than individual interest, this is the time to work for the community but not 2022,” Kabogo said.

He noted the Central region is filled with hatred and bitterness towards one another and most of the time is being used to insult each other online instead of unifying the community.

He regrets that Mt Kenya area was the only part of the country that was left in a campaign mode after the disputed 2017 general elections.

“All other communities are silent and probably concentrating on development but in Mt Kenya region, we are busy fighting one another, let’s all come together and serve our people, let’s make use of our numbers,” he urged.

Kamande states that the community will negotiate with all presidential candidates and support whoever will give them the best deal when the right time comes.

“We as Kikuyu elders, we are calling for unity, and those propagating divisive politics should stop it, continued 2022 politics will harm the economy as well as spurring conflict. Leaders should be preaching peace and unity to the population,” an agitated Kamande said.

He adds that Kieleweke and Tanga tanga groups from the region should now be busy talking about roads that need repairing, coffee [sector] that needs to be fixed, the tea sector that should be managed and the dairy industry and horticulture that have been mismanaged.

“Ruto should not talk of another 10 years, the pact with Uhuru will expire 2022 and should, therefore, prepare to exit with the Uhuru administration or else he campaigns without tagging Kikuyu community,” he states.

He further stated that the campaigns have hindered smooth service delivery to the citizens negatively impacting the national development agenda.

The deputy president has on several occasions made it clear that no individual or community owes anyone including him any political debt.

However, to achieve his dream, the DP must overcome the herculean task of consolidating the votes and backing of two regions that would all but catapult him to the presidency.