Nyeri Town Member of Parliament Ngunjiri Wambugu has hilariously trolled outgoing Agriculture Cabinet Secretary Mwangi Kiunjuri after he was left out of government in the latest cabinet reshuffle.

President Uhuru Kenyatta sacked Kiunjuri on Tuesday, January 14, in a state of the nation address that saw changes in the Cabinet and state corporations announced.

While reacting to the cabinet changes on Facebook, the Nyeri Town MP picked on Kiunjiru following the manner in which he addressed the locust menace and made fun of him. 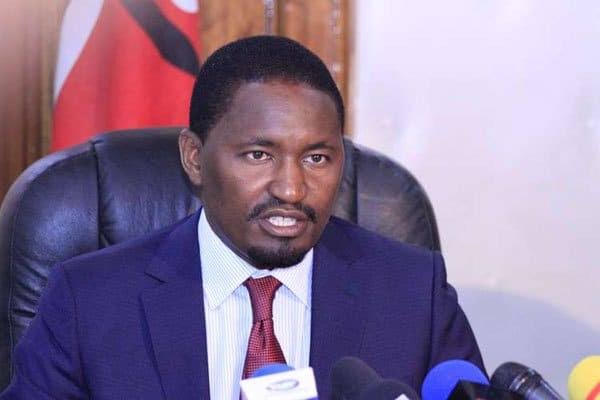 “If you had taken pictures of locusts or anything that looks like it, you can delete.” Ngunjiri posted on Facebook.

If you had taken pictures of locusts or anything that looks like it, you can delete.

Kiunjuri recently made headlines following a January, 10, comedy-laden presser on locusts invasion in the country.

He became a laughing stock on social media after he asked Kenyans to take pictures of insects they suspect to be locust and post on social media so the ministry can confirm if there were desert locust.

“If you see any insect that you suspect could be a locust, take a picture and post on social media so we can confirm for you what insect it really is,” he said.

Following these events, his sacking by President Uhuru did not catch Kenyans by surprise.

While addressing the public at Serena Hotel hours after being fired,  Kiunjuri said that he was right to sack him.

“The president’s decision has taken me with no surprise. I thank God, I feel relieved. I take this opportunity to thank President Uhuru Kenyatta for giving me the chance of serving in his Cabinet. I have gained immeasurable experience, exposure and have an insider’s view of how the government works.” He said.

He added that he gave his best and did not regret his time serving the people of the country.

“I have given my best in all assignments that I was given, and I am proud of my achievements. I turn my new page knowing that when God closes one door, another opens.” He reiterated.