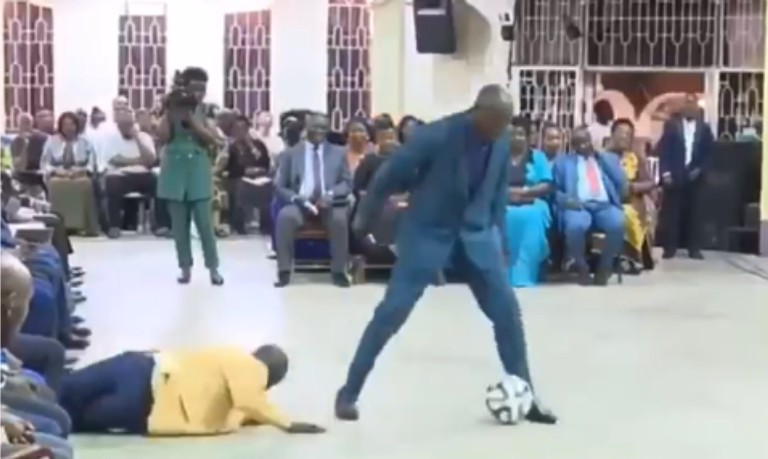 A Ugandan pastor has shocked netizens after a video of him casting out demons using football went viral.

In the video, the pastor asks some church members to go to the pulpit area and as he dribbles the ball, the followers are seen falling on the ground in a possessed manner. The pastor together with the rest of the congregation laughs off as this happens.

One of the church members then speaks after the exorcism is performed saying that he has never seen such a thing and the miracle made him believe that Jesus exists.

The pastor then asks the congregants who seem to be enjoying the ‘circus’ whether he cheated while kicking the ball and they all side with him that indeed his act was genuine and miraculous.

Twitter users have made fun of this ‘miracle’ stating that African pastors are overworking to remain relevant.

nu!$@nce @nunce7
If only Uganda can play ball as good as it’s pastor, players of other countries will be having fits anytime they face Uganda on the football field..
The Preacher @Kariimu_K_Babu

Obar Mark@Obar_Mark
I really get sad when I see such things in the Church.
Feiwest @mfwest2006
Those people who are sitting there watching and clapping are the most stupid people in this planet.

Other strange ways that pastors have used to cast out demons include, using soda, touching the church members privates and other controversial acts.

Seriously this is a joke 😁😂 am sure those guys wudnt want to be even touch the ball! 😂