A 12-year-old girl from Tana River County has become the talk of the town after her brave efforts to retrieve herself from the jaws of a crocodile which had attacked her while fetching water from a river stunned many.

The girl, Riziki Mzubaki, had gone to the river to fetch water accompanied by her stepmother on a fateful day before the unexpected happened.

Despite not witnessing the attack at the moment, the girl’s stepmother Mrs Asha Salim said she heard something heavy falling into the river from the behind as she made her way back home.

“After filling my water pot and placing it on my head, I started walking towards home leaving my daughter behind. All over a sudden, a huge crocodile emerged and started attacking her on the leg. She was screaming asking for help while trying to fight the beast,” stated Mrs Salim.

Her screams attracted the villagers who rushed to the scene but sadly, they were unable to help.

“I witnessed as the reptile submerged her inside the waters and that is where I knew her chances of survival were next to zero. I was so worried and confused that I lacked what to explain to her father” added Mrs Salim. 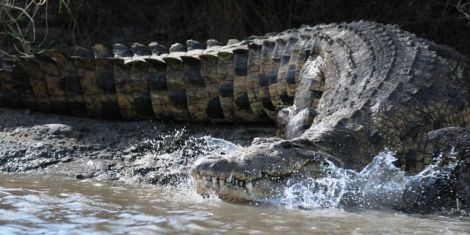 According to the witnesses, the crocodile submerged the little girl inside the water for some few seconds before she emerged with one of her legs tightly held in between the jaws of the reptile.

Realizing it was only a matter of seconds before the crocodile swallowed her, the young girl is said to have acted bravely by striking hard on one of the crocodile’s eyes.

The blow is said to have inflicted an intense pain on the crocodile’s eye, forcing it to let go of the girl’s leg.

On seeing this, the villagers, who had gathered by the riverside, acted swiftly and rescued the girl who was already tired and weak.

From far, the crocodile was seen emerging and submerging ready to reclaim its ‘kill’ but was turned away by the sight of the huge crowd which had formed armed with all types of crude weapons.

The young girl was rushed to Masalani hospital in Garissa county where she is currently recuperating from injuries sustained from the attacks on her left leg.

According to the area chief, Mr Iddi Wayu, Riziki’s brave efforts, despite her young age, stunned many locals having in mind that crocodiles in the river, had previously attacked and killed grown-up men.