Just a week before the controversial city lawyer Miguna Miguna makes his grand return to Kenya, President Uhuru Kenyatta has given him a green light. 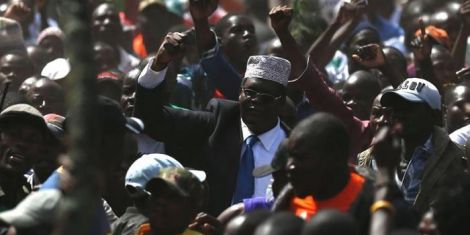 Speaking on Monday in Murang’a during the burial of veteran politician Charles Rubia, Uhuru said that every Kenyan was entitled to freedom of speech and that those who are abroad are free to come back and “Make Noise” as they are entitled to it.

The president stated that all who want to express themselves will be allowed back to enjoy the benefits of Freedom of Speech.

President Uhuru hints that @MigunaMiguna will be allowed back to enjoy the benefits of Freedom of Speech.He was responding to Hon. @WahomeHon challenge. " Mheshimiwa we shall defend the right to freedom of speech, hata naskia kuna wengine wanataka kupanda ndege wakuje kuongea.."

Uhuru’s remarks come just some few hours after Government Spokesperson Rt. Col. Cyrus Oguna stated on Monday that Miguna would be granted entry into the country but on strict conditions.

Oguna said Miguna was free to come back into the country as long as he has all his travel documents.

“If he has all his travel documents, he will definitely be allowed back to the country. All his papers must be right and valid as per the travel regulations. We are governed by the rule of law,” Oguna informed a local media house.

On December 19, 2019, Miguna communicated that he would be returning to Kenya on January 7 2020, saying he had the right to return to the country while urging the government to respect court orders which granted his return.

“Thank you, comrade. See you on January 7, 2020. Kenyan citizens don’t need permission to enter, reside in or leave Kenya. Kenyan belongs to all of us. Despot Uhuru Kenyatta, Conman Raila Odinga and their hypnotic zombies don’t own Kenya. We will never beg for our rights. Viva!” posted Miguna on Twitter.