Two years have passed since the death of the former Independence Electoral and Boundaries Commission(IEBC) official Chris Msando.

On a Saturday morning, his former colleague Roselyn Akombe refreshed the healing wounds of Kenyans on a day that was purported to be his 47th birthday.

Akombe implied that Msando sought to protect the integrity of our elections; and for that, he was silenced.

However, the chilling memories of Msando brought the Raila factor in the picture.

Activist Boniface Mwangi insinuated that Msando died while defending Raila Odinga who later on joined his critics through shaking hands with President Uhuru.

The agitated activist added that Raila is no longer Kenya’s liberator but instead a traitor.

The TRUTH is @RailaOdinga is no longer a LIBERATOR but a TRAITOR. Kenyans have died for him but when he shakes hand with thieves Moi, Kibaki and now Uhuru,he does it for himself.Kenyans were killed in 82, 2007,2013-17,baby pendo,Msando etc but he hasn't demanded for their justice https://t.co/6yTFd5DAjm

Conman @RailaOdinga is not angry with Despot Uhuru Kenyatta for torturing, mutilating and killing Chris Msando whose birthday is today. Or for stealing the 2017 elections and killing thousands of Raila's suppoorters. He is angry because Ruto is hosting crowds in Sugoi.

Akombe herself was not left out of the blame games, as some citizens criticised her for working for the IEBC even after the merciless killing of Msando.

The critics thought that she betrayed Msando by pertaining in the general elections even after foreseeing an electoral injustice.

Yet after he was murdered you still went ahead to conduct an election you knew was already rigged, and before the SC nullified it, it was the position of the commission (which you were still part of) that the election was free, fair and credible. 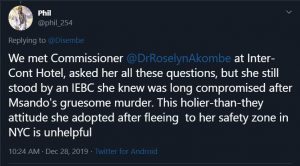 Akombe left the commission later in October 2017, months after the death of her colleague.

When she left, the commission was in preparations for a repeat presidential election that was only eight days away.

The repeat presidential elections were scheduled after the nullification of the results of the general elections by the supreme court on September 1.

Akombe cited a lack of credibility from the IEBC in the anticipated elections as the reason for her Exodus.