Wiper Party leader Kalonzo Musyoka cannot seem to get anything right, at least according to Kenyans.

In fact, Kalonzo’s political survival since the 90s beats all logic granted that he always aligns himself with factions that end up losing on all political fronts.

Popularly known as ‘Watermelon’ for his notoriousness in political fence-sitting, the former Vice President often finds himself as the subject of trolling and insults from citizens and fellow politicians.

This was the case after he, on Monday, pledged loyalty to President Uhuru Kenyatta, the man he so vehemently opposed during the 2017 an 2013 General Election.

He made the declaration while speaking to Kamba leaders at his Yatta home.

“I have made a resolution that I and the Kamba community are not flip-flopping and where Uhuru will be even after 2022, we will be there,” he said.

According to Netizens, Kalonzo’s antics are no longer surprising, as he wanders around trying to maintain political relevance.

Others sympathised with NASA co-principal for choosing the wrong side, once again.

Meanwhile, Kalonzo’s watermelon alias is back to haunt him. 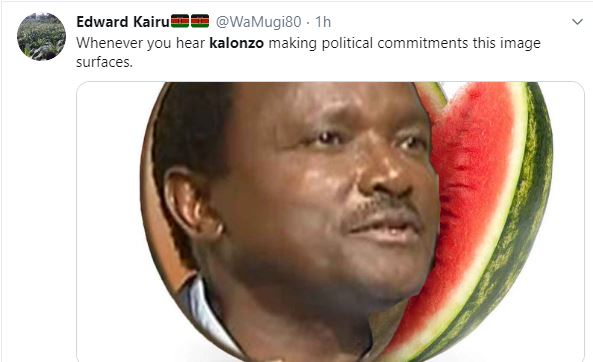