Nairobi has amazing weather all year round; towering skyscrapers with mesmerizing lights; beautiful parks that allow the residents to unwind and take in a bit of nature and the rest of the world is always just a click or a flight away. Yes, Nairobi is a beautiful city.

The super-rich Kenyans are increasingly becoming concentrated in the cluster of estates such as Muthaiga, Karen, Runda among other upcoming posh estates, and it seems unlikely this is going to change.

The idea of residing within the CBD doesn’t sit well with Kenyans due to its chaotic nature thus forcing the majority of Nairobians to squeeze for space in estates such as Pipeline, Kasarani and Githurai.

Since the 19th Century, the Indian community has been known to live within the CBD along Kijabe Street, Kipande road and parts of Parklands.

It seems this phenomenon has caught on with a section of the elite Kenyans who don’t seem to mind the pandemonium of the City.

The first person on the list is flamboyant Nairobi Governor Mike Sonko who lives at the rooftop of Lilian Towers (Nairobi Safari Club), owned by city billionaire Stanley Githunguri. The 16th floor is the presidential suite where he parts with millions per month. 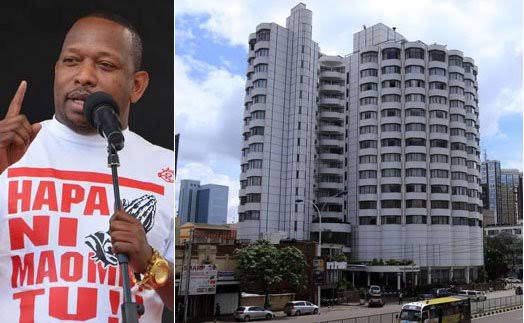 With its unique maize-cob shape, the Nairobi Safari Club is one of the iconic buildings in the city. It opened in 1984 as a members-only club.

On November 5, 2017, Daily Nation reported that Sonko forks out Ksh1.8 million in bills for his ‘new home’ at a high-end city hotel.

However, when he was questioned about using County resources to fund his flashy lifestyle, he denied.

“I am meeting people here for my private businesses which I don’t have to disclose to you,” he said.

Kenyan philanthropist Chris Kirubi is still rumoured to be living at International Life House along Mama Ngina Street and a stone away from his radio station, Capital Fm.

Kirubi is known to love and live a flashy lifestyle and may be why he likes operating from within the town centre – despite owning properties worth billions.

Other Kenyans include two of the living Rwathia Group of Companies Directors (owners of the popular Sabina Joy) Gerald Kanyuira and Wanjoora Mwangi.

Their attachment to their businesses is a tale to tell having lived within the CBD along Sheikh Karume and Munyu road for more than four decades.

Kanyuira, to whom President Uhuru Kenyatta issued the key to the golden city, lives at Alpha House at the junction of Munyu Road and Ronald Ngala.

His effort and love for hotels are unmeasured owing to the fact that he oversees the operations of more than 20 hotels under the Rwathia tag.

He is also uncle to Equity Bank chairman, Peter Munga, whom he once employed him as a waiter at Alpha hotel, the same building that he lives in.

Mr Njoora Mwangi, a co-director at Sabina Joy, also enjoys living in the city under the sun; his house is located at Sheikh Karume road, Timboroa building. 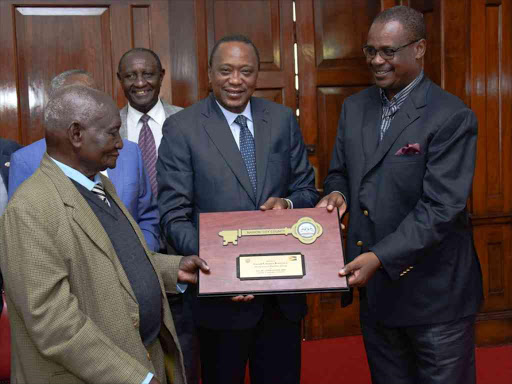 “All the Rwathia directors lived within the CBD to run their businesses having started as hawkers during the Kenyatta era. They were influenced by the Indian culture and adopted the lifestyle of working and living within the city,“ our source stated.

Former Mayor John King’ori, who is the owner of Accra hotel along Accra Road, also enjoyed the serenity of the CBD. Opera News has, however, established that he recently relocated.

The late Kanyuira Tutu, who is uncle to the late security minister John Michuki, was a director at Kinangop, Timboroa, Modern Green (Green Colt). Some of his family still stays within the city.

According to Mr John Mweiga (a close associate to Rwathia Boys) who has lived in the city from 1974, says that they adopted the city life to manage the properties.

“We came to Nairobi as hawkers, we didn’t have any education and we adopted the ordinary life thus changing becomes a problem,” he stated.