A few minutes after Kiambu County Assembly MCAs voted to oust embattled Governor Ferdinand Waititu, Elgeyo Marakwet County Senator Kipchumba Murkomen has called on all the senators to report back to Senate from their holiday.

Through his Twitter account, Murkomen, who doubles up as Senate Majority leader urged his counterparts to cancel all their Christmas and new year travel plans and instead report back to Nairobi to debate on Waititu’s impeachment

“To all Senators please cancel your Christmas and new year travel plans. Those already out of the country take the next flight back home. Duty calls !” tweeted Murkomen on Thursday evening.

According to the law, the senate, under Senate Special Committee is mandated with reviewing the governor’s impeachment as well as getting the governor’s side of the story after which it will submit its final report to the House for debate.

Kiambu Speaker, Stephen Ndichu, is currently presiding over a motion in the county assembly on the fate of Kiambu Gov. Waititu.
Do you think it is time for the Governor to be impeached and why? #TheDailyBrief pic.twitter.com/bYA9ucPYjv

The house will then be expected to hold a special sitting and vote to either adopt or reject the recommendations of the committee.

Waititu was impeached on Thursday afternoon after 63 county MCAs voted to oust the governor over allegations of gross misconduct and abuse of office.

Only one MCA voted against the impeachment motion which was tabled before Kiambu county assembly by Ndenderu MCA Solomon Kinuthia.

Among other governors who have had their fate decided by the senate includes Murang’a Governor Mwangi Wa Iria, Embu County Governor Martin Wambora and Taita-Taveta Governor Granton Samboja who all survived after the house thrashed their case. 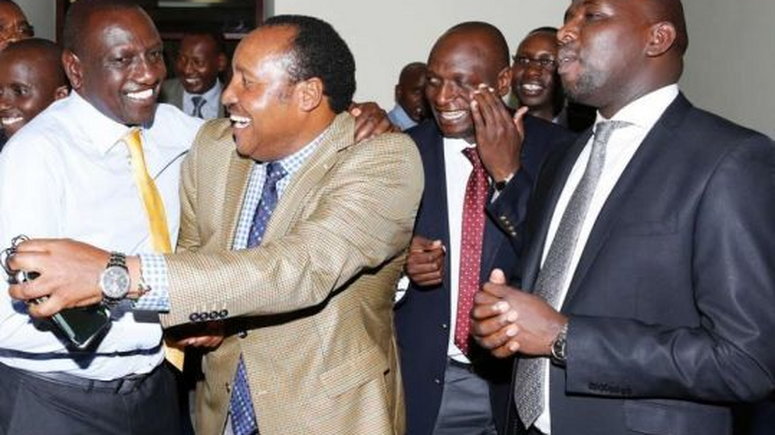 A total of 28 MCAs were absent during the impeachment vote.

The MCAs argued that Waititu’s prolonged ban from accessing his office had greatly affected service delivery to the residents of Kiambu since there were some tasks which the deputy governor James Nyoro could not preside over.

Never in my life had I imagined that waititu will be in the same class with Donald trump #WaitituImpeached pic.twitter.com/WWg8BVDRaO

Ferdinand Waititu officially has all the time to go smoke bhang with his friend Mike Sonko … Anyway , what a good day 😂😂😂 #WaitituImpeached pic.twitter.com/2Fi3xwfnyT

Governor Ferdinand Waititu has been impeached on this #ImpeachmentDay by Kiambu County Assembly over alleged abuse of office and gross misconduct. 63 MCAs voted to impeach Waititu, one voted against and 28 MCAs were absent. (Photo courtesy). #Impeached #WaitituImpeached pic.twitter.com/4hHzx1vqUR

Looks like Christmas in Kiambu County just got cancelled.#WaitituImpeached pic.twitter.com/Ph3DvT0vR0