State House Digital Secretary Dennis Itumbi is as controversial as it gets.

From allegations that he was behind fake Deputy President William Ruto assassination plot claims, to being thrown out of public events in front of the full glare of cameras, Itumbi almost always finds his way into the middle of political discourses, and, every now and then, matters of the heart.

The journalist’s affection for former Citizen TV’s Jacque Maribe is no news for Kenyans, as is the fact that Maribe has squarely placed him in the friendzone.

Nevertheless, Itumbi appears optimistic of his chances with the journalist who was previously engaged to one Joe Irungu, better known as Jowie, before her love bubble burst, after Jowie was arrested and held for alleged murder.

Itumbi’s most recent act of passion was his Wednesday morning birthday poetic piece dedicated to Maribe, who he described as a”fire of beauty and sexy.”

As usual, Kenyans on social media were quick to note the pointlessness of Itumbi’s apparent love for Maribe, especially after she was spotted several weeks ago vacationing in the wilderness, with comedian Eric Omondi and their son. 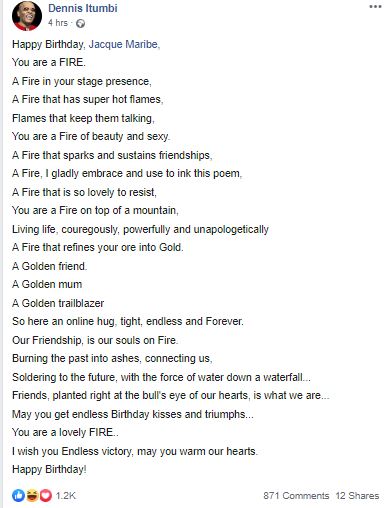 This time around, however, the smitten Itumbi did not allow cheeky social media users to ruin his carefully crafted birthday dedication to his friend.

Instead, he closely followed the reactions to his poem, which he shared on Facebook, not hesitating to fire silencing clapbacks at individuals who dared love-shame him. 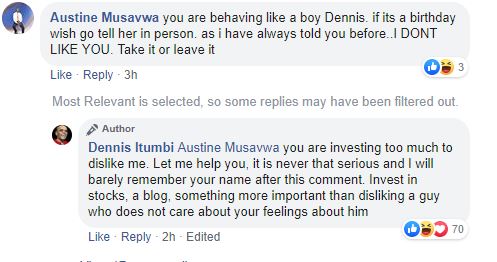 On the other hand, he expressed his gratitude to the compassionate few who encouraged him in his romantic hopelessness.