Machakos County Governor Dr Alfred Mutua on Monday morning arrived at the Kilimani Police Station to record a statement over alleged threat on his life that occurred at State House last week.

Mutua claims that a section of Jubilee leaders allied to Deputy President Dr William Ruto have been threatening him.

According to him, the National Assembly Majority leader told him that he had been attacking them over a long period of time and they are now set to deal with him.

The Machakos county boss said Duale warned him against attacking the DP.

“Duale said ‘you’ve been attacking us and we will deal with you. Ukigusa DP unagusa sisi’ (if you touch the DP it also affects us),” Mutua claimed.

According to the governor, Elgeyo Marakwet Senator Mr Murkomen asked Duale to step aside so that he can deal with the county boss.

“Murkomen said ‘Duale niachie I’ll deal with him’,” Mutua alleged in a presser on Monday morning.

Mutua further accused Duale of threatening to deal with over 50,000 members of the Kamba community who live in Garissa.

“Duale then said do you know there are more than 50k Kambas in Garissa and I can deal with them,” he cited.

Mutua says the DP warned him over what he alleged as continued attacks against him. 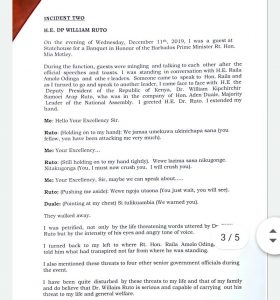 He, however, vowed to remain unshaken on the matter, urging police to do their work.

He further urged Kenyans to put him in their daily prayers.

“I will remain unshaken in this matter. Police will do their work and I call upon Kenyans to put me in their prayers,” noted Mutua.