Police in Lodwar have recovered 163 illegal firearms as part of the ongoing exercise of recovering firearms in the hands of the civilians.

Turkana County police commander Samuel Ndanyi commended the public for supporting the exercise saying it has boost security in the area.

“Since the exercise started we have experienced peace along the Kitale-Lodwar highway,” Ndanyi said.

He said Turkana South Sub-County is leading in the number of illegal firearms surrendered so far.

Last week eight illegal firearms were recovered in the sub-county bringing to 60 the number of guns recovered so far. 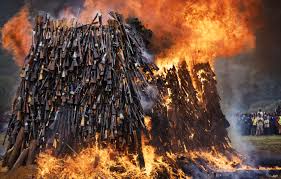 Police officers on leave have been recalled to provide security during this festive season.

The county boss added that officers would not be allowed to go on leave during the season.

“We are keen to ensure that all citizens are safe during the festive season, “said Ndanyi.

Ndanyi added that police patrol along the Kitale-Lokichiggio road have also been intensified.

Cases of highway robbery have in the past been witnessed along the highway especially during the festive season.

Meanwhile, passengers and motorists from Kapenguria to Lodwar on Tuesday morning left stranded at Ortum in West Pokot County after the road was swept away by raging floods.

Samuel Otieno told KNA that he was stranded at Ortum after a temporary bridge constructed by Kenya National Highways Authority to connect Kitale-Lodwar road was swept away by floods.

One person has so far died at River Kawalase in Lodwar due to the ongoing rains.