The National Government will meet all the hospital bills and funeral expenses for victims of the landslide in West Pokot County, the area County Commissioner (CC), Apollo Okello, has said.

Speaking yesterday when he visited Nyarkulian Primary School camp in Pokot South Sub-county, Okello said his office has sent names of those affected and currently working on burial arrangement.

“Currently the government is working on burial arrangements. The names of those who lost their lives have been forwarded and hope that before the end of the week, all the bodies would have been buried,” said Okello.

He further appealed to people still living in areas prone to landslide to move to safer places and take precautions against flooding.

CC pointed out that deforestation in surrounding mountains might be the cause of landslides as rainwater runs over down the bare slopes.

The Commissioner further issued a stern warning to those who were not affected against taking advantage of the situation by collecting food and non-food items from Nyarkualian, Parua and Paroo camps.

The three camps are accommodating more than 4,000 survivors whose houses were swept away by landslides and floods.

“We have noted that most people who were not affected come to the camps during morning hours and leave in the evening after collecting beddings, utensils, and foodstuff that is meant for the victims. The population of the camps is high during the day while low at night,” he noted. 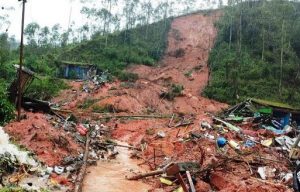 He pointed out that Nyarkulian camp had received a lot of donations from different people and organizations, saying it was devastating to see some of the genuine victims not having beddings.

Apollo who visited some of the homes that were buried by landslides said the Government had given out food and non-food items to the victims, especially those who lost everything.

“If you are not affected just stay at your safe home why are you oppressing those who lost everything by collecting what was meant for them. Some walk kilometers away to reach the school and grab the donations. You should allow the affected to mourn peaceful,” he said. 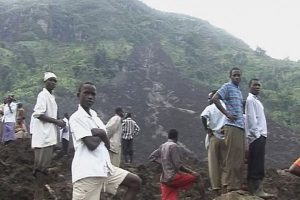 “The government has supplied food and we have enough food for those whose houses were swept away by landslides, will continue supplying them, we have given out utensils, blankets, camping tents, and jikos among others,” he said.

CC said the government has plans to relocate and settle the landslide victims to safer grounds.

“Construction of low-cost houses to the survivors will start soon we are relooking on how and where will resettle all victims affected’, he said.