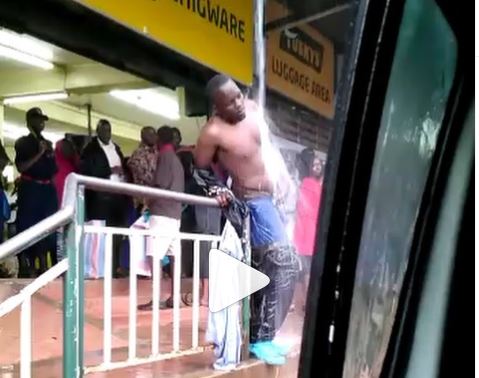 A Kenyan man has shocked netizens after a video of him showering in rainwater emerged online. The video, which has been making rounds online, has angered many.

The man stands outside Tuskys supermarket and used the water falling from the drainage system gathered from the rain to shamelessly clean himself. This was in the clear view of onlookers.

The video was posted by social media influencer Joe Muchiri. In his caption, he wrote:

Irrate Kenyans have blamed his actions on the immunity and corruption in the government leading to increased poverty in the country.

This comes after the President of Kenya publicly said he doesn’t understand why Kenyans are broke, sentiments that have been ridiculed by many Kenyans.

A man who drives his father’s car cannot advice men who own bicycles on how to become successful. – African Proverb

Others have made fun of the showering man instead. Instagram user @houseofisabel.ke hu hilariously said,”Hii Bangi ya Kisii si mchezo.”

Check out the video that has gone viral below: