The Likoni Chanel is increasingly hitting the headlines for all the wrong reasons.

On Monday, a Kenyatta University bus slid off the ramp of a ferry and into the Indian Ocean, narrowly escaping from plunging into the deadly Chanel.

Another near tragedy at Likoni Ferry. Kenyatta University bus slides off ferry ramp. In Kenya we never learn pic.twitter.com/8ChYjnBTTo

This barely a month after a woman, Miriam Kighenda, and her daughter, Amanda Mutheu, died after their vehicle sunk into the Ocean following a similar mishap, with authorities taking two weeks to retrieve their bodies, and their ill fated vehicle.

Following the Monday varsity bus near-miss, Kenya Ferry Services (KFS) has issued a statement acknowledging the incident, which was captured in a video, that has since gone viral on social media.

In the footage, the high capacity bus is seen partially submerged in the Ocean waters, positioned at a plunging angle, with only its front wheels positioned on mainland ramp.

This, according to KFS, happened because while disembarking from the ferry, the bus driver accelerated to a dangerous speed, thus failing to negotiate uphill momentum. 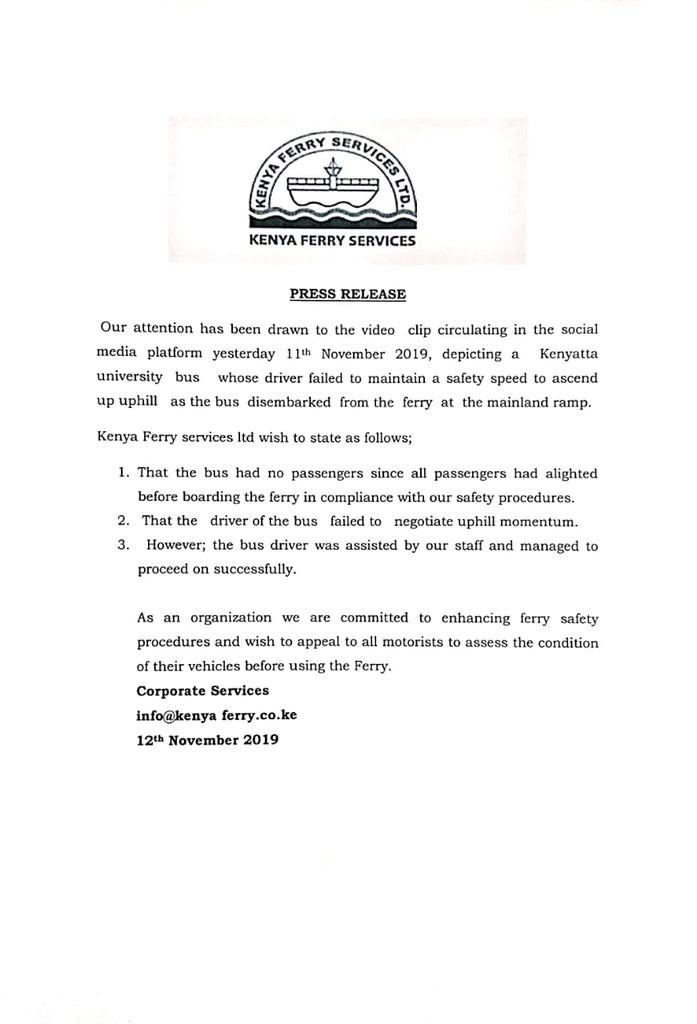 The Service also countered eye-witness reports that indicated that at the time of the incident, the bus was fully occupied, saying that the passengers had followed the instituted protocol of alighting vehicles while in transit on ferries.

With the assistance of the KFS emergency response team, the driver and the bus were promptly rescued from being engulfed by the killer waters, KFS Corporate Services noted in the statement.

Further, the Service cautioned that motorists should ensure their vehicles are in stellar condition before boarding the ferry, to prevent tragedies caused by vehicle mechanical failure.

KFS is under new management, after President Uhuru Kenyatta fired all members of the KFS Board at the time of the Sep. 29 accident, that claimed the lives of Miriam and Amanda.