Speaking during a thanksgiving rally at Kibra after ODM’s thunderous win in the MP by-election on Sunday, Owino alleged that Odinga is so good at bedroom affairs, that the two female County Heads cold not help but join the former Prime Minister’s political brigade.

In the recent past, Kibra Constituency has been referred to as Odinga’s bedroom, which politically translates to the politician’s stronghold.

Today at thanksgiving rally at Kibra Constituency.Mama Ngilu and Ann Waiguru came to our bedroom because Baba is a performer and they wanted to enjoy and have fun in our bedroom,that’s why bedroom ilikuwa moto.

This did not auger well with supporters of Waiguru and Ngilu, who were quick to reprimand the fiery MP for what they termed as disrespect for the two pioneer female governors under the new Constitution.

So hot was the heat directed at Owino, that he, Monday evening, took to social media to defend himself by clarifying that he did not mean for his message to be interpreted in a sexual way.

According to the former Student Unionist, he only meant what he said Sunday in a metaphorical manner, but the public misconstrued his intentions.

“I look forward to a fruitful and meaningful political journey ahead working hand in hand with these two respectable ladies,” he concluded. 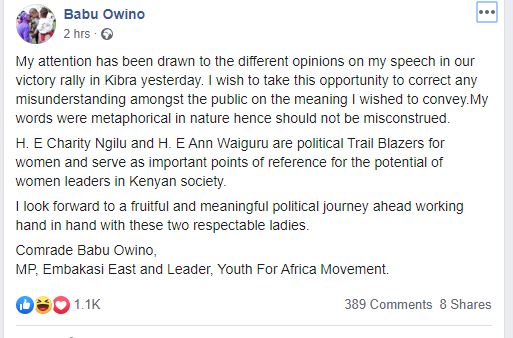