Mourners at Mufutu village in Lugari Sub County were on Monday left bewildered when police officers stormed the funeral ceremony of a deceased local resident and stopped the proceedings to enforce a court order.

Hundreds of mourners had gathered at the home of the late Joseph Kamtuwa for the burial when police officers from Lumakanda Station arrived and served the court order while the burial Mass service was going on.

The disruption caused tension with some family members opposing the decision to cancel the burial and threatening to forego the religious rituals and go ahead with burial.

However, police officers cautioned the mourners they risked prosecution if they dared disobey the order and proceed with the burial.

The deceased’s family is entangled in a land ownership dispute with a neighbour Charles Manyonge who claims ownership of the piece of land where the late Joseph Kamtuwa was expected to be buried.

Representatives of the family led by Peter Wandukuyu Simiyu and Patrick Wachenda claimed the land in contention legally belongs to the Kamtuwa’s. 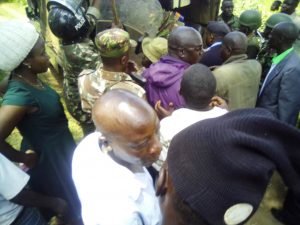 “This land belonged to our late father Wilson Kamtuwa who was buried here together with our mother and we have all legal documents of ownership,” they said and demanded that the complainant be investigated and asked to explain how he got the title deed he alleges to have which they say is fake.

They accused Manyonge of always causing disturbances whenever they have funerals and claimed this was the third time for him to stop the burial of their kin.

“First we were served with a stop order during the burial of our father Wilson Kamtuwa, then our mother and now our brother,” they complained.

Geoffrey Roha said they are surprised that even after winning two previous cases filed by the complainant they thought the matter was settled and added they were baffled when police appeared this time again with another court order.
“He should tell us who sold him the piece of land he is claiming ownership because we are not aware if he bought here land because as a family we were not involved,” said Wachenda.

The body was later taken to Chebaiywa hospital mortuary pending a resolution of the matter by the court.