Just two days after a section of Mt. Kenya MPs stated that they would like Agriculture CS, Mwangi Kiunjuri, to take over as the region’s kingpin after President Uhuru Kenyatta retires in 2022, Nyeri town MP Ngunjiri Wambugu has rubbished the suggestion.

Taking to his Facebook page on Monday, Ngunjiri, who has been so vocal against the Deputy President William Ruto and his brigade in the Mt. Kenya region, gave three reasons why he thought the CS cannot fit into Uhuru’s shoes.

According to him, Mt Kenya people cannot be led by people whom he alleged are in office to do business and not to represent those who gave them the opportunity to serve.

He also cited Kiunjuri’s place of birth, Laikipia, saying the CS was a resident of Rift Valley, therefore, not be in a position to handle Mt. Kenya issues.

Citing the example of Kibra,(Mariga’s candidature), Ngunjiri said the people of Central were not going to allow an ‘outsider’ to be their leader, urging Kiunjuri to hold discussions with leaders from the Rift Valley to be appointed the region’s kingpin.

“Mt Kenya issues are different from Rift Valley issues; (eg Maize versus Coffee/Tea). He was elected there 3 times. He should discuss with our URP brothers & he can lead them. Mt Kenya is not Kibra where outsiders can be shipped in to represent us for political expediency. Mambo ground ni different sana (things on the ground are different),” communicated Ngunjiri.

He also added that Kiunjuri had failed as the Agriculture minister to address issues affecting Mt. Kenya people such as coffee, tea, milk, irrigation, and horticulture. 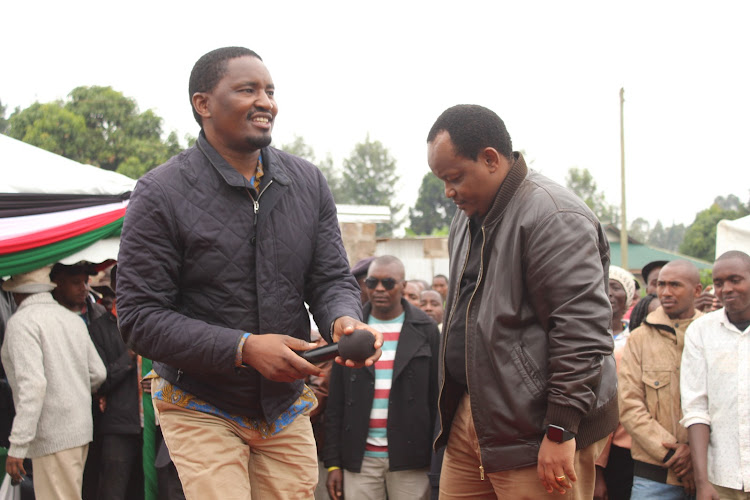 “He has done nothing to address the region’s issues such as coffee, tea, milk, irrigation, and horticulture because he is busy positioning himself to ‘take over’ from Uhuru. Nîathîe nakûu!” He added.

On Friday, November 1, 2019, MPs from the Mt. Kenya region told Kiunjuri that they would like him to take over from President Kenyatta in 2022 as the region’s kingpin.

It is expected that President Kenyatta will leave State House in 2022 upon completing his second term and his exit from Kenyan politics has left Mt. Kenya region at crossroads trying to find its next kingpin.