A mother of one in Bureti Sub-county, Kericho has been granted a second chance to complete her secondary school education and sit for this year’s Kenya Certificate of Secondary Education (KCSE), after dropping out of school 10 years ago.

The last time Faith Chebet Ngetich (Mama Kiprop), 26, sat in class was in 2006 and dropped out of school, but as life would have it, she could not pursue her dreams of becoming a teacher.

She is the oldest in her Form Four class of 55 candidates at Kusumek Mixed Secondary School and is optimistic that she will outshine her classmates in the National Examination.

KNA caught up with her in school, Friday, November 4, 2019, and she exuded confidence in passing the exam with a B+ grade or better as she had done her preparation thoroughly.

After years of yearning for education, Mama Kiprop took a decision to go and complete her secondary school education in December 2015, saying hardships and constant rebukes that she was unschooled, pushed her to pursue her dreams of going back to school.

“I come from a single-parent home and we are five in the family. I dropped out of school in 2006 when I was in Form Two at Cheptalai Secondary School. My mother could not afford to provide for my school fees and at the same time, the burden to raise five children alone was too much for her, so I opted to leave our home in Chesingor village to stay with a relative at Litein town. In 2010 I began selling secondhand clothes but I did not do well and in 2011 I decided to go back home and this is the year I also got married,” she narrates.

“In my fourth year of marriage I resolved to go back to school and my decision arose from the ill-treatment and verbal abuses i received in my new home. I was determined more than ever to improve myself academically. I did not have money but i wanted to go back to school desperately to earn respect that comes with being educated and so in December 2015 I took the bold step of going back to school,” she said wiping away tears.

In 2016 the mother of one braved cold and rainy nights to read and during the day she would work as a tea picker to save enough money to take her back to school.

Her determination and hard work paid off for in 2017 she was accepted to join Form Two class at Kusumek Mixed Secondary School despite her being  24 years old. 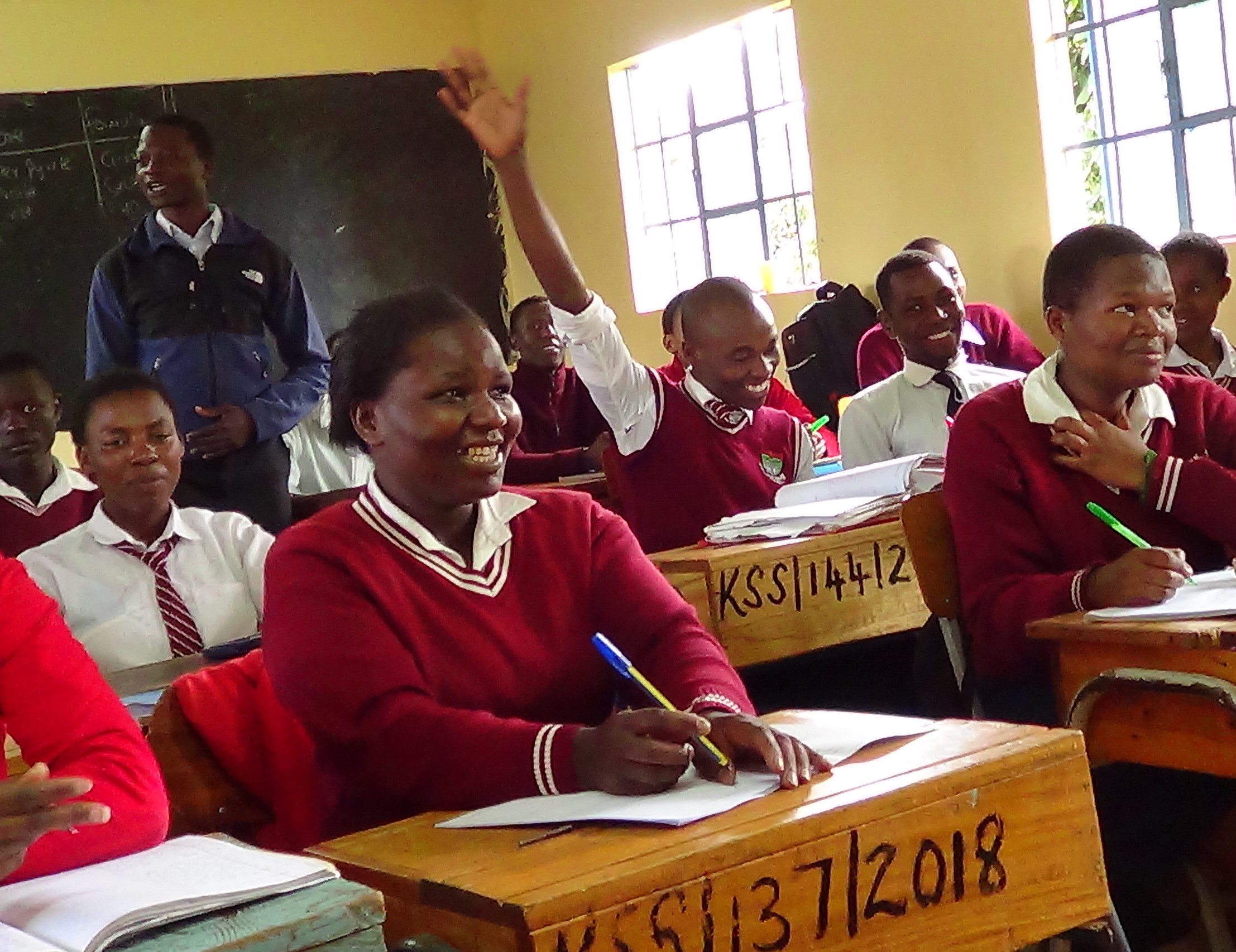 “For one year I worked as a tea picker for another family, during my free time, I would write my Form one notes as well as do my revision. My job paid off when i saved Sh 30,000 and in 2017 went to Kusumek Mixed Secondary School to enroll back but to my surprise, following the interview I was listed to join Form Two class because I was over 18 years, “said Chebet.

She adds that nothing will stop her desire to attain the highest level of education.

“My desire is to uplift the living standards of my family. Get admission to a teacher’s college to train as a teacher and end up to be a teacher will be my greatest joy,” she added.

Chebet is grateful to her husband’s support and financial assistance in chasing her education dreams.

“My husband is my pillar of strength. He has been supporting me at our home as well as in my studies. He attends our son’s and my school meetings without fail and is able to pay for both our school fees. When I am busy with my revision, he takes care of our son and also helps out most of the time and this is something I cannot take for granted,” she added.

When contacted her husband, Charles Ngetich, said he dropped out of school in class seven due to challenges at his home and has grown up seeing the importance of education.

“I dropped out of school in class seven because my parents could not afford my education needs as well as to adequately provide for myself and my siblings. When I met my wife she told me her dreams of going back to school and her desire to become a teacher, I did not object because I saw the passion behind this. I have seen those who go to school become empowered and are able to change their lives and their families,” said Mr. Ngetich.

He said his support for his wife has earned him a lot of rebuke from family members and friends who argue that he should not waste his money and time on educating a woman.

Ngetich adds that he chides relatives who keep advising him to take on a second wife, claiming his wife has neglected his home as she is too busy pursuing her education.

Her class teacher, Dishon Isait ‘Papa’ described the mother of one, as disciplined, focused and taking academic issues seriously, thereby, making it easy for teachers to couch her towards her dream.

Despite her age and immense challenges of being a mother and a wife, Mr Papa revealed that Chebet has always topped her class.

“Faith Chebet Ngetich has maintained position one during the period she has been in Form Four with a grade of ‘C’ plus and is very hopeful of passing the exams with flying colors. She comes to school as early as 6 am and leaves after 5 pm, she is disciplined as well as being very committed to her studies,” said Papa.

Kusumek Mixed Secondary School Principal, Mr. Henry Kipsang Koskey, said he is optimistic that Chebet will top her class, while challenging other girls who drop out of school owing to various challenges they face in their lives to go back to school because it prepares and orients them on the right path. He adds that in order to be successful in life one has to focus and embrace perseverance.

Bureti Sub-County Director of Education (SCDE), Joseph Olepirdai, disclosed that in 2018,  4,631 candidates sat for their KCSE and 1,269 students scored C+ and above, qualifying to join university.

He said this year 5,179 students have registered to sit for their 2019 KCSE examination from both public and private schools in the area.

Candidates sitting for this year’s KCPE began their exams today, November 4, and will wind up with the last paper on November 27th.