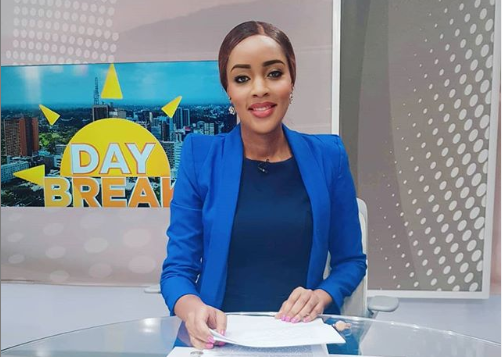 Former Citizen Tv news anchor Joey Muthengi has today expressed her emotions considering that it marks a year since she left Royal Media.

Speaking on twitter, Muthengi apologized to her coworkers in advance stating that it is going to be an emotional day for her.

The media personality also admitted that leaving Royal media was a very difficult decision for her.

Although Muthengi never really gave a reason for her exit, some sources revealed that her troubles started after she signed a deal with Betin company yet RMS has its own; Shabiki.

After her last show on 10 over 10,  KFCB boss, Ezekiel Mutua was on her case claiming that she misused her talent to campaign for immorality. Muthengi responded to Mutua revealing that she did not care.

Thank you all for welcoming me back 🙏🏼

In January, Joey secured a deal with International media; Voice Of America as a correspondent before landing another job at Capital FM.

The media personality also thanked her fans for encouraging and supporting her through her career transition.

“Today marks 1 year since I left my last job. It was a very difficult decision. Yet God guided me to the place I am now. Today I am happy, content & know that I am loved.

“So thankful for the people who’ve stuck by me & encouraged me along the way. God bless” she wrote

Hey November! 👋🏼. Today marks one year since I left my last job. It was a very difficult decision and I had no idea where i was headed afterwards. Won't lie I've had some tough days. Yet God has guided me to the place I am now. Today I am happy, I am content and I know that I am loved. I'm so thankful for the people who have stuck by me and encouraged me along the way. God bless ❤.