An alleged KCSE certificate of a Jubilee candidate for the Kibra constituency by-election has emerged, sparking a heated conversation on social media.

McDonald Mariga, whose real age remains a mystery, has now been exposed after the certificate showed he sat his KCSE exams in 2004. 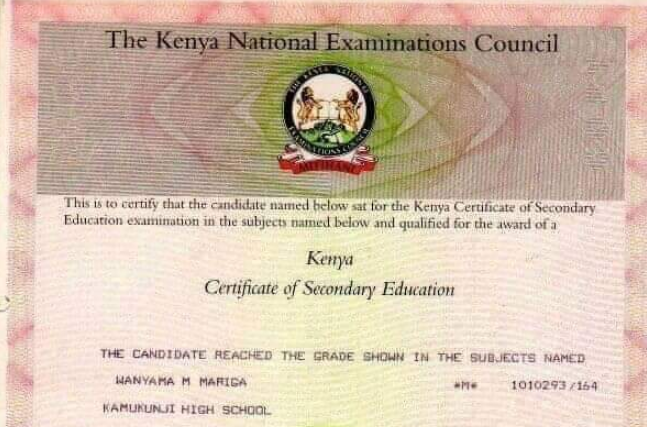 In the alleged certificate seen by Opera News, Mariga seems to have considerably ‘excelled’ in Commerce which he managed a C- (minus) and completely flopped in Mathematics which he managed the least grade E.

He would manage another D- in the English, Biology, Chemistry and Physics while attaining D+ in Kiswahili and D (Plain) in History & Government.

However, papers presented to the IEBC are said to have revealed that Mariga had completed his KCSE education in 2002, having been born in 1987.

In September, a petitioner Leina Konchellah said she would challenge Mariga’s candidature after the numbers failed to add up.

In the petition, Konchellah said Mariga must have been a genius at Primary school level and unusually lost his brilliance upon stepping foot in Secondary school.

She also noted that Mariga’s schooling, calculated backwards, would mean that he enrolled for Standard One at age three!

IEBC would clear Mariga as fit to vie for the seat, saying they were satisfied having gone through the former footballer’s papers.

This came after Mariga faced hurdles that could have ultimately locked him out of the Kibra race after it emerged he never signed his voter registration acknowledgement slip.

Campaigns for the by-election end today (Monday) as the residents are headed for the voting exercise on Thursday, November 7.