It has emerged that a group of people in Nairobi are using extreme means including disconnecting, switching off or re-routing water with the aim of cutting off residents so as to make millions of money.

According to Waithera Wanjiru, a researcher with Grassroot Initiative Women Kenya and resident in Matopeni slum located in the outskirts of Nairobi, over ten million shillings is made annually by the water cartels.

In an interview with KTN’s Hussein Mohammed, Wanjiru said, ” we did the mathematics of how much money is made from that borehole and the water carteling business and for a month there is 0.970 million made out of the water business here.” 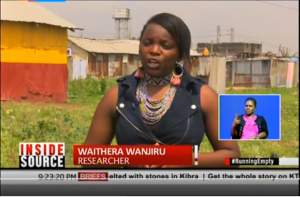 Sadly, unlike other clean businesses, the cartels make a whooping profit at the expense of the residents’ health reports revealed.

Despite piping by the Nairobi City Water and Sewerage company through the slum most residents do not get water and are left to buy water from the vendors.

“Water from the taps when it is there only stays clean for about twenty minutes then it changes colour to one similar to that of sewage water. It’s only around 4 pm that we get to fetch clean water which is usually not enough,” one of the residents said.

The residents are then left with no option rather than to buy water from the cartels who charge high premiums for the dubious water quality.

Residents, however, fall sick after drinking water from the borehole. 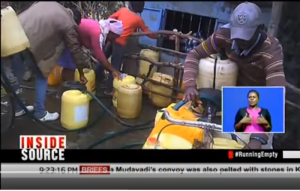 Susan Mumbi who agreed to talk to Mohammed about her ordeal explains how she had been going to the hospitals for days because her young child is a victim.

Several other residents also revealed how they had fallen sick after taking the water which prompted Mohammed to take a test on the water at Analabs Laboratories.

The test results reveal that the water is not fit for human consumption let alone be used for watering plants.

Further inquiry into this reveals that the borehole was sunk in a place that previously used to be a dumping site thus the toxicity in the water.

In January this year, Nairobi Governor Mike Sonko had said he would reshuffle staff at Nairobi Water and Sewerage Company to deal with cartels he said were causing an artificial water shortage in Nairobi.

A Statement that Wanjiru Nderu, a human rights activist and a member of a local NGO, totally seemed to support.

“The specific area of Matopeni does not have water but their neighbours have water and what you find is, that this water is diverted so that these people can buy water from this boreholes, but who owns these boreholes? It is the political class within the area.”