She has made headlines for the past one week for coming out to boldly speak over her frustrations in the Police force. Jane Asimizi, a police officer who came out to protest her recent deployment to areas she termed as difficult to make money in has been sent on a compulsory leave by her bosses.

According to Police Service Commission Chairperson Eliud Kinuthia, Asimizi has been sent on compulsory leave to enable her cool off.

The PSC has also ordered that Asimizi be subjected to a psychiatric examination to ascertain if she is of sound mind.

Kinuthia has argued that what Asimizi said on tape last week is not typical of a normal law enforcement officer.

According to Asimizi, She was  assigned the lucrative task of manning an exam container in Kakamega, but was withdrawn from that duty four days later because according to her, her bosses thought she was making lots of money from the posting. She also claimed that she was withdrawn from guarding the exam container since she did not have the money to bribe her superiors to let her keep the position.

She has blamed her woes on her minority tribe. She is from Turkana County.

“I have had enough of being frustrated and intimidated,” she said on Wednesday.

“Why can’t my bosses treat me fairly?” she posed.

“I have now resorted to speak out, even if it would cost me my job. All along, they post me to areas where I cannot easily access money. Why?”

“Is it because I am from the Turkana ethnic community, which is a minority group in Kenya? I am in Kakamega because I am married to a man from the Luhya ethnic group,” said Asimizi.

“I am fed up, and I want my gripe to reach my bosses in Nairobi, and [even the Interior minister] Fred Matiang’i. For the lengthy period that I have served in the disciplined forces, I have never breached any regulations. My seniors can bear me witness.

“With such unappealing postings, I am only left with my salary to survive on. Special tasks such as exam container-guarding duties often allows a cop to make extra money,” she said. 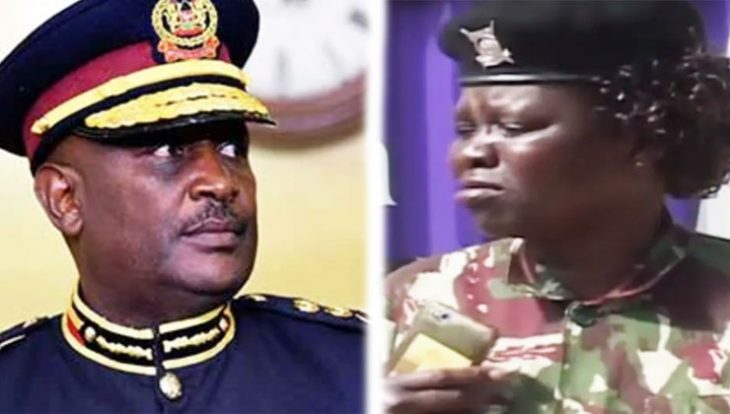 Her rants seem to have angered IG Mutyambai who called her out for going public with her frustrations in the plice force.

“The woman’s frustrations ought to have been channeled through private avenues. As a police officer, she shouldn’t have gone public to express her anger. I have given instructions for the officer to be taken to hospital [for mental examination]. We are managing the matter without raising hullabaloo about it,” Said Mutyambai.

Asimizi’s direct boss, Leonard Omollo, who is the Western Kenya deputy regional police commander, said that the AP officer lied about being originally assigned to man the exam container.

“I would like to state categorically that nobody deployed that [police] officer to guard that container,” said Omollo.

“That officer was going on escort work, and she wasn’t assigned the duty of guarding that [exam] container. We have an operation order that shows where an officer has been deployed and what he or she should do [at his or her work station]. Officers deployed to guard containers were made aware of the postings a long time ago.

“In the case of this officer [Asimizi], I would say, again, that nobody deployed her there. I am treating her case as one of indiscipline. As a service, we have procedures of handling such cases. I won’t allow anyone to come up with a fabricated claim that I deployed a cop somewhere because I wanted money. I do not do that, and that won’t happen [under my watch],” said Omollo.