In efforts achieve gender equality across all divides in the country, the government has instituted several measures to increase access to opportunities for women, including in the political sphere.

This has led to the increase of women politicians especially in the National Assembly with the creation of the Woman Representative and Nominated MPs positions.

However, the country still has long way to go in uplifting women if recent acts of embarrassment towards women in Parliament are anything to go by.

In 2019 alone, there have been three high profile such incidents within Parliament. The three three cases have been under different circumstances but the outcome is similar: Public embarrassment for women.

According to eye-witnesses, the two had gotten into an arguement over funds allocation before the latter punched Gedi on the cheek and insulted her.

The matter was reported to the police and Kassim was charged, but he was later released on a Ksh.50,000 cash bail after denying charges the charges.

In August, Parliament hit the headlines yet again when it was reported that Kwale woman Representative Zulekha Hassan was kicked out of the House for attending a session with a baby. 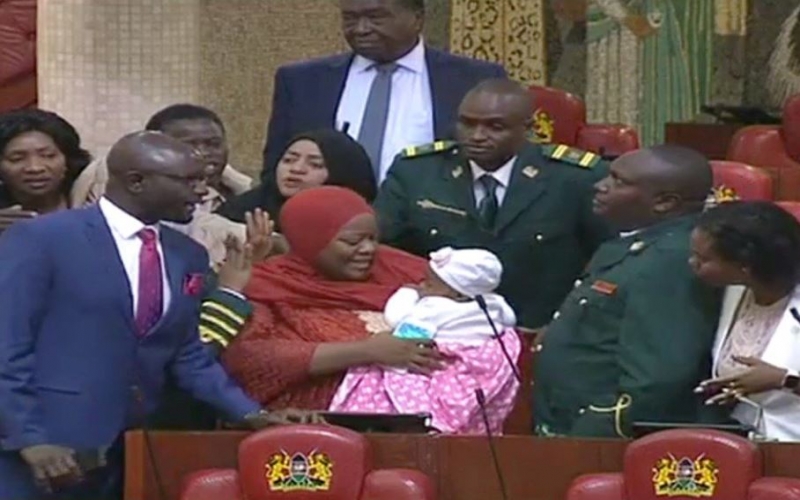 According to Zulekha, her nanny was away without notice and this promted her to carry her baby to work as would any other mother.

Zulekha pointed out that Parliament building did not have a creche for such situations, and one was immediately put together but the damage had already been done.

In September, musician Akothee was humiliated over her dressing when she visited Parliament grounds on invitation by nominated MP David Ole Sankok.

The singer was barred from entering the premises for what security termed as skimpy dressing and it was only after she tied a leso around her waist that she was allowed to proceed with her business.