Baringo is a Jubilee zone and in 2022 we will all vote for Deputy President William Ruto who is in a better position to take over from Uhuru Kenyatta when his term expires.

This is according to a section of Baringo leaders who were speaking on Saturday during the House Warming ceremony of Jubilee Nominated MCA Elizabeth Kipsang at Kiptilit in Baringo Central.

Led by Baringo County Deputy Governor Jacob Chepkwony, the leaders communicated that Baringo is ready to support the DP wholeheartedly and they will not hesitate to back his presidential bid which will see him occupy the house at the top of the hill.

Chepkwony, added that the county government of Baringo is fully behind Ruto since they don’t have any other option.

“Ruto is at a better position to replace Uhuru Kenyatta once his term comes to an end in 2022 and we as Baringo people are going to support him to the last man,” remarked Chepkwony.

Baringo Assembly Speaker David Kiplagat reiterated by saying that they are championing for Ruto as one way of ensuring that he sails smoothly to the statehouse in 2022.

Kerich noted that other people might be talking about other candidates but as the people and leaders of Baringo, they have already made up their minds on whom they will support. 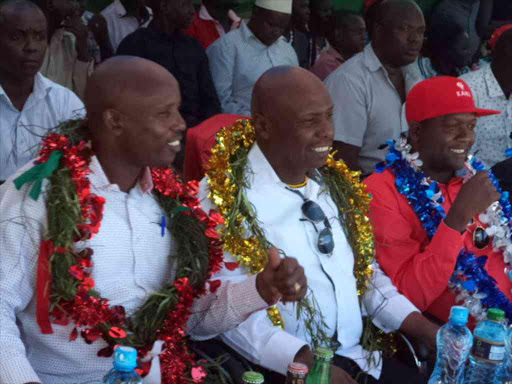 Kapropita ward MCA Jennifer Kabon stated that the Jubilee wave has taken over the county by storm.

However, Ewalel Chap Chap ward representative Peter Kebut said that he is not confident about the party’s Leadership since they have not given space to the youth.

He lamented that recent government appointments has seen a number of old people being appointed to take over job opportunities which could have benefited the youth.

Ruto and Baringo Senator Gideon Moi have been at loggerheads with each trying to control the vote-rich Rift Valley region ahead of 2022 general elections.

Despite supporting the former President Moi in his previous terms in office, Ruto’s relationship with the son of the country’s second president Gideon Moi has deteriorated due to supremacy battles with Gideon Moi trying to pull the region under Kanu’s leadership.