According to the woman MP, Waiguru’s declaration that she was supporting former Prime Minister Raila Odinga in 2022 has affected her political ratings in the county.

Speaking on Wednesday morning when she was interviewed at a local vernacular station, Kass FM, Wangui blamed the governor saying she had herself to blame for announcing her political stand without first consulting her electorates.

Despite this, Wangui maintained that the county boss still had a chance to bounce back to her ‘past glory’ only if she consults and reconsider her position. 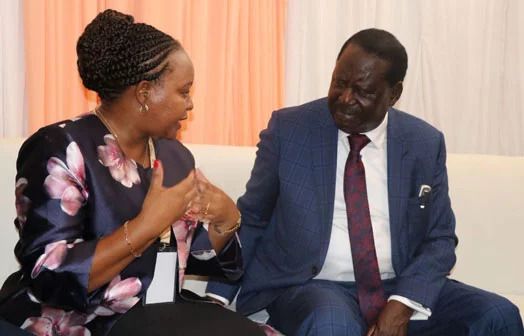 “From the time she declared her support for the former Prime Minister Raila Odinga, governor Waiguru has remained politically unpopular in Kirinyaga. She went against the will of many county residents, therefore, I am asking her to rethink her position,” she stated.

Hon. Wangui Ngirici: Governor Waiguru's sentiments that she supports former Prime Minister Raila Odinga has made her politically unpopular in Kirinyaga. I ask her to rethink her position. pic.twitter.com/SvFkCpMrzn

While echoing Gatundu South MP Moses Kuria’s recent remarks, the MP insisted that selling ODM chief Raila Odinga to the central people was next to zero insisting that the region was already determined under Jubilee’s next candidate in 2022.

Her sentiments come just some months after Waiguru declared she was going to support Raila Odinga for the Presidency in 2022.

According to Waiguru, the Mt Kenya region was open to forming a political alliance with Opposition leader Raila Odinga ahead of 2022 terming Raila as someone who understands the significant role that women play in Kenya’s politics.

Waiguru’s remarks, however, did not sit well with many Kenyans who accused her of being misguided. Most Netizens bashed the governor, citing that she wasn’t the region’s spokesperson to make such utterances. Many warned that her remarks could signal her downfall, especially noting her ambition to rise higher in the political circles.

Mount Kenya region has recently become the country’s hotcake region owing to the fact that President Uhuru Kenyatta’s second term will come to an end in 2022.

Deputy President William Ruto has been enjoying massive support from the region but with ODM party leader Raila Odinga’s dalliance with President Uhuru Kenyatta, the region has probably been up for scrabble as the country heads to 2022 polls.