Secretary-General Francis Atwoli has hit out at Deputy President William Ruto saying nobody will get votes in Western Kenya without his blessings.

Speaking on Sunday when he led a funds-drive at Bukwala SDA Church (Khwisero) Kakamega county, the trade unionist warned all Luyha leaders who were drumming up support for Ruto that the residents will reject them come 2022.

He added that he (Atwoli) was the one to decide for the residents whom they will vote in 2022 since he had greater influence and a large following in the region. 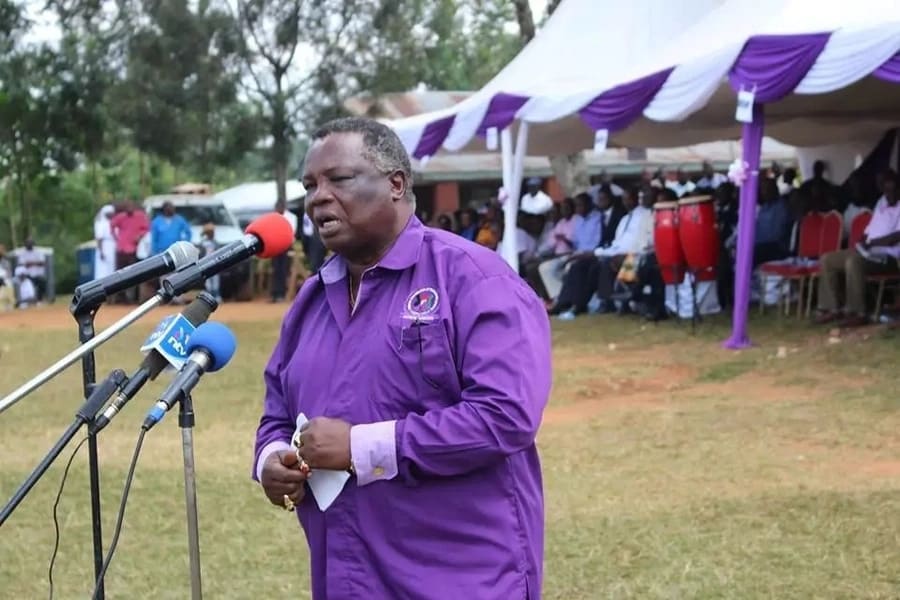 “You cannot get a seat here (Kakamega) without my blessings, this time the names I’ll read out are the candidates Luhyas will elect in 2022 so that we can know who is more powerful here,” he stated

Francis Atwoli: You cannot get a seat here (Kakamega) without my blessings, this time the names I'll read out are the candidates Luhyas will elect. #CotuFundsDrive pic.twitter.com/8l0K2hoTq5

He also revealed that he was going to be part of the government that will be formed in 2022 after President Kenyatta retires. He warned that those who will not take heed to his advice will definitely fail in 2022.

“I am going to be part of Kenyans going to formulate a new government after Uhuru Kenyatta because I am influential and command a huge following. I cannot be undermined,” said Atwoli

He maintained that Ruto was not going to be president because he is making people worship him instead. Atwoli maintained that Luyhas were not divided as others would want to insinuate adding that Leaders were the ones divided.

While throwing jabs at the DP, Atwoli wondered how Ruto who is said was a young boy when he was already employed could manage to be a billionaire overnight. He warned church bishops to be cautious against corruption proceeds being given to them by Ruto.

At the same time, Atwoli laughed off the mix and march suit worn by both President Uhuru and his DP William Ruto in 2013 saying things had so far changed between the two.

“In 2014 they (President Kenyatta & DP Ruto) were wearing matching outfits, are they still doing the same?” posed Atwoli.

I predicted handshake it came to pass, I said the constitution should be changed and we are getting there. Ruto’s money will finish your children,” warned Atwoli

He also thanked the President and CBK governor of introducing the new currency as one way of curbing corruption. he challenged the government to go after those who changed huge amounts

Nandi evictions also took center stage with many leaders calling on their colleagues to take the issue for discussion in parliament.