With the delicate and extremely challenging processes undertaken by divers in Likoni’s search operation, the government has decided to employ the use of cameras and robots in a bid to locate the vehicle which plunged into the ocean on Sunday.

But did you know how these robots and cameras work underwater? Well, Opera News ‘dived’ and re-emerged with answers that might satisfy the curiosity of many Kenyans looking forward to the success of the operation.

According to the government’s spokesperson Cyrus Oguna, the equipment they were using in the operation was among the best in the world.

He observed that the robots and the cameras had been able to identify various locations where the wreckage could be located.

However, the robots could not tell whether what they had located were masses of rocks or the vehicle. According to Oguna, it was the responsibility of the team to interpret and mark the locations for a thorough search. He cited poor visibility halting the search operation.

Now with the use of innovative technologies, divers are able to send Robots to great depths, locate critical areas and send divers down to inspect, allowing for efficient use of time and the ability to zero in on specific areas.

Robots and craft cameras also allow divers to remain rested until they are needed during the rescue process.

Deep Trekker’s internal 4K Ultra HD Camera is easy to use, with live, zero-latency viewing on its handheld controller, all while the dive is recorded in 4K resolution.

This allows Search And Rescue teams (SAR) to see clearly underwater and identify mission targets via camera and video footage. 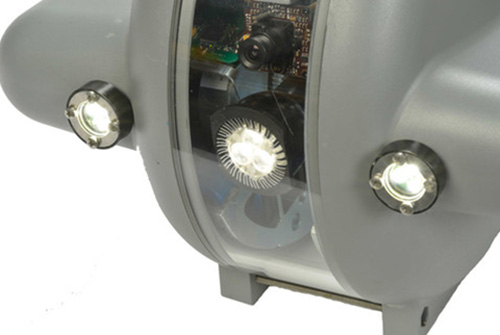 During search missions in dark and murky waters, Deep Trekker offers external LED lighting in addition to the internal LED flood light that tracks with the camera.

If operating at night or diving to great depths, the high powered LED lights are essential to illuminate underwater.

When visibility is low, underwater footage is far more accurate with the use of sonar technology providing clear images of the ocean floor, and targeting essential areas.

When an underwater target is identified, a grabber’s arm is deployed from the front of the ROV to securely grip the object and direct it to the surface of the water.

Deep Trekker’s Two-function grabber arm can rotate 360 degrees and hold up to 70 pounds of in-water weight, opening up to seven inches.