Months after the conclusion of Huduma Namba registration exercise in Kenya, the clerks who ensured the exercise was successful are still crying for their dues.

The Clerks’ complains and cries over the government’s failure to fully pay them their monies have now been taken online with the majority of Kenyans on Twitter KOT calling on the government to fulfill their promises. 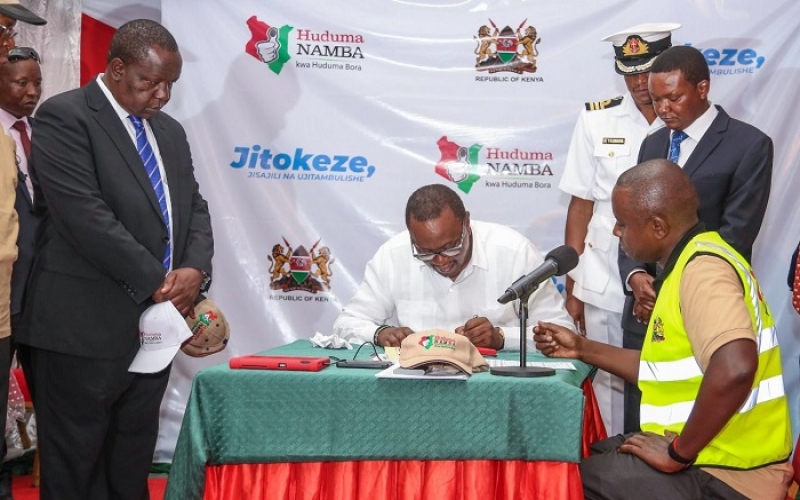 The already trending hashtag #HudumaNamba has taken Twitter by storm with a majority of the users casting accusations on the government for ‘stealing’ from the less fortunate in the society.

According to reports, the Registration Assistants (RA) and IT officers have are yet to receive their full allowances from the government.

“We only received Sh20,000 before the exercise was terminated and we were promised to have the balance a few days after the whole process was over. It is almost four months now,” one user lamented.

“Our bank accounts are read nill yet we were focused to deliver the best services to the county,” said Nancy Wairimu, another RA who worked in Murang’a County.

“I regret working during the entire process. We have not received anything, leave alone the first batch. The youths are suffering! We need our money now,” said Ochoro from Kisumu county.

The cries come despite the government setting aside a huge budgetary allocation for the exercise, approximately Sh5 billion.

The same fate has also been faced by the recently concluded Census Enumerators who have also joined hands with their Huduma Namba counterparts to call for their payments which they said have also not been effected one month after the counting exercise.

This comes at a time the High Court of Kenya on Monday, started hearing the case presented by The Nubian Rights and Haki KNCHR against Huduma Namba.

In its arguments, the two human rights bodies argued tha Huduma Namba is in content and form unconstitutional. It also argued that the Namba violates the right to privacy and also exacerbates discrimination.

Their cries through Twitter, however, leaves them with a ray of hope that the government will be touched and act swiftly. Here are some of the comments from the already trending topic;

You @KNBStats are turning out to be cons and untrustworthy. Nothing so heartbreaking when the people cant trust their own government. PAY THE #HudumaNamba clerks immediately.

Kindly RETWEET to get this to Responsible Government Authorities

cc.Cs @FredMatiangi @SpokespersonGoK Cs @mucheru#HudumaNamba Clerks have Not been Paid their Dues 6 Months after being Contracted by the Government to Register Kenyans for this Exercise. pic.twitter.com/5YO4XorfoD

Would Politicians take their mandate seriously if they were held accountable by their constituents? #HudumaNamba #development pic.twitter.com/OVTfwnT89z

The way #HudumaNamba registration agents were insulted and working tirelessly, learning today that they haven’t been paid still is unacceptable. The government set aside a budget for the project, who is this still holding their money? It’s not fair. Inappropriate.

when i remember the kind of pressure we were put thru' and we are yet to be paid..sukari inapanda #HudumaNamba

We are still waiting to be paid for #hudumanamba months later.. After working crazy ass hours on a seemingly useless task https://t.co/gY0BrfNd5O

The irony is that despite the forced registration process, no one has been issued with a #HudumaNamba till date, ama it's just me?😑🙄😌 https://t.co/5iwW010gs2

Someone who is close to Zachary Mwangi the director general @KNBStats give him this message. Enumerators of the #HudumaNamba and Census are demanding that you come out and tell them where their pay/money went. Are you trading with the money?

Members of the Nubian community are here en-masse alongside our team of community paralegals, who have been supporting the community all year to engage with the #HudumaNamba #NIIMS proceedings #legalempowerment pic.twitter.com/6qvcdLvu6P