Police officers who had surrounded the studio pounced on the young Kiharu MP immediately after his Live Interview at Kameme TV.

Nyoro was being sought after in connection to his Sunday confrontation with nominated MP Maina Kamanda at a church in Murang’ a. 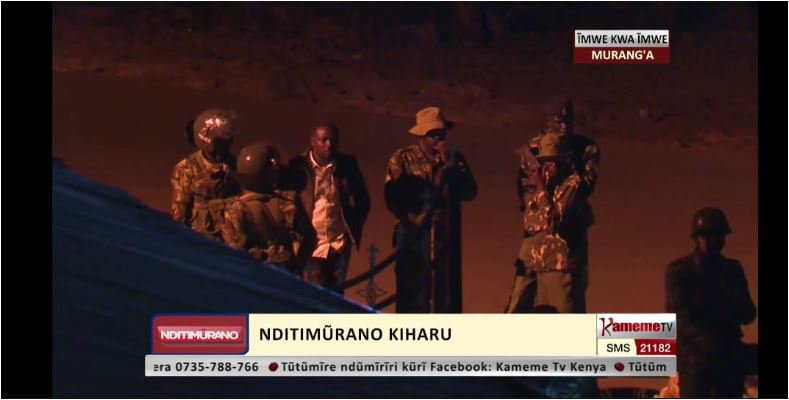 Nyoro and Kamanda clashed at Gitui Catholic Church in Kiharu, leading to chaotic scenes that prematurely ended the service.

He had earlier on escaped arrest after his supporters blocked officers from arresting him while leaving the church compound in Kiharu.

Later on Sunday evening, Nyoro was at Royal Media Service’s Inooro TV for a show that was to end at 9 pm.

When the police learnt of his whereabouts, they camped outside the premises waiting to arrest Nyoro the moment he stepped out.

But on catching wind of the motive, Nyoro, with the support of fellow lawmakers, however, stayed put until a half-hour to midnight when he successfully sneaked out of the station

According to reports, the legislator used a vehicle belonging to one of his colleagues to get out of the station without getting noticed.

Following his arrest orders, leaders associated with Tanga-tanga wing of Jubilee have come out strongly to condemn the Director of Public Prosecutions and the Police service for allowing themselves to be used to intimidate some leaders.

“I am actually surprised that Ndindi Nyoro has been arrested. I hope the Inspector General of Police remembers that power is transient and that we are merely temporary trustees in the offices bestowed upon us to serve and not to oppress others. I hope the Director of Public Prosecutions will stand up to be counted!,” Said Murkomen after Nyoro’s arrest.

I am actually surprised that @NdindiNyoro has been arrested. I hope the @IG_NPS remembers that power is transient and that we are merely temporary trustees in the offices bestowed upon us to serve and not to oppress others. I hope the @ODPP_KE will stand up to be counted!

My brother, Murkomen, why are you feigning surprise when it is self-evident to even your grade 6-child that Kenya's illegitimate despot Uhuru Kenyatta is using the @DCI_Kenya, @ODPP_KE and @EACCKenya to decapitate his deputy @WilliamsRuto by politically amputating his "legs?" https://t.co/ZVZ1DaZaLp