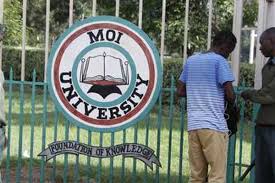 Gross allegations have been made against Moi University following the sudden resignation of Dean of Medicine Prof Lukoye Atwoli.

Prof Atwoli said he was resigning because he has been under intense pressure from his colleagues and the University administration.

His reason for calling it quits has exposed the underlying administrative forces that threaten the future of the institution.

Blogger Seth Odongo alias Disembe Dikembe, an alumnus Moi University, claimed that the varsity is planning to manage the institution the way Arror and Kimwarer dams were managed.

By comparing the management of Moi University to Arror and  Kimwarer dams management, Disembe is simply trying to insinuate that if considerable steps will not be taken the University will suffer the same fate as those dams.

Disembe who is known for championing of the rights of the voiceless has received back up from the online community who believe that Moi is not properly managed. One social media user by the name Nick Kiron has argued that the ‘mtu wetu’ syndrome is affecting the institution.

Theirs is to loot, and the mtu yetu syndrome is still the disease there.

Moi is always run like a local cattle dip. No structures whatsoever.

Again, those saying Disembe is playing the tribal game, he’s not. Just facts. Moi University has and always been a preserve of Kales just like NCPB is.