Arsenal striker Eddie Nketiah is on the verge of leaving the club for a season-long loan to an unnamed Championship side. The striker enjoyed a positive spell in pre-season and scored two goals.

Nketiah spent most of last season on the bench behind Pierre Aubameynag and Alex Lacazetteand could find himself in the same situation this season. He is currently at a point where he needs more playtime to develop which is why a loan move seems like the best option for him. 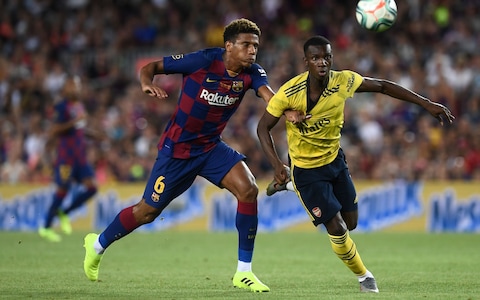 Meanwhile, out of favor defender is eager to stay at the Emirates and prove himself despite the club being adamant that they want him gone. The German World Cup winner has had a torrid time at the Emirates with a couple of simple errors leading to the fans turning against him.

He was booed during Arsenal’s Pre Season tour in the United States and again during their loss to Lyon in the Emirates Cup.

Highly-rated 20yo striker Eddie Nketiah set to leave Arsenal on season-long loan. Bristol City among a number of clubs in talks to sign England youth int’l. Currently no firm offers for defender Shkodran Mustafi & he wants to stay – but foreign teams have longer to do a deal #AFC

The transfer window closes on Thursday for all English team but the clubs can be allowed to sell their players to teams outside the country up until the end of August.