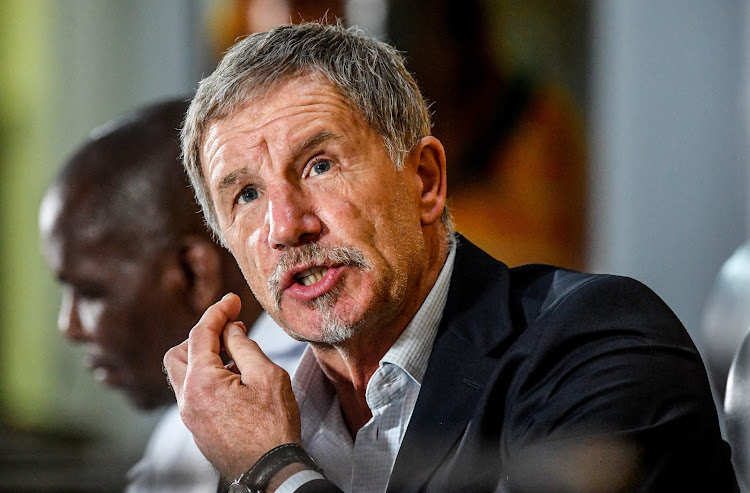 South African fans have given a harsh send-off to Stuart Baxter after announcing his retirement from coaching Bafana Bafana. The 65-year-old British coach made the decision at a private press conference he summoned on Friday in Johannesburg.

Stuart Baxter: "Someone should continue with this project and therefore am resigning as @BafanaBafana coach."

His decision comes just weeks after South Africa reached the quarter-finals of the 2019 African Cup of Nations in Egypt, bundling out the hosts in the last 16 but falling 2-1 to Nigeria.

After the announcement, South Africans, who appear to have been harbouring a grudge, stormed social media to scold him for Bafana Bafana’s failure during his stint.

Good riddance!!! He was useless for the national team. Thanks GOD. This is what we call divine intervention. I doubt SAFA had balls to pull de plugs.

Mmmmmmm thanks …go to coach your own country

Hip hip…Hurray!!! bye bye Stuart and I’m sure your country needs you👍🏽

Baxter is just too prideful to admit that he was wrong for benching Lorch.

Thanks for your resignation after failing us dismally,we hope that who ever is going to replace you will know that national team belongs to entered nation of South Africa you don’t just do as you pleases you do what is right for the country and promote our soccer

Best news ever.
Must have been painful watching Lorch score and tearing apart ur Chiefs.
You were useless.

It was long overdue. He was a total misfit.

Best thing has ever happened this year at least

But he took so long pic.twitter.com/x2EVRZjigw

It was Baxter’s second spell as head coach of the Bafana Bafana after his reappointment on 4 May 2017, replacing Ephraim ‘Shakes’ Mashaba, who was sacked in December 2016.

He was first appointed in 2004 with an eye on the 2010 World Cup, which the country was to host. However, after blowing a strong position in the 2006 World Cup qualifiers and failing to reach the finals in Germany, Baxter left the job.