Was Deputy President William Ruto at JKIA on Saturday evening as purported by The Standard newspaper? According to the local daily, Ruto was at the airport to together with embattled Kiambu governor Ferdinand Waititu to receive President Uhuru Kenyatta who was arriving from Zambia.

Ruto was, however, left frustrated as Uhuru broke protocol and left he airport using the ordinary passenger terminal. The DP was informed minutes later that his boss had left the airport.

These allegations have been denied by the self-proclaimed hustler, saying he was not anywhere near the airport and that the newspaper and its owners are desperate.

FAKE NEWS ALERT!!!
I was nowhere near JKIA. I am NOT surprised that some media houses & their owners are this desperate. Tuwasamehe tu!! pic.twitter.com/vVjlLnCCd6

Talking about owners, the fake story allegations came barely hours after Kipchumba Murkomen, one of Ruto’s most trusted lieutenants had accused Gideon Moi of blocking his interview on KTN. Both KTN and Standard newspaper are owned by the Moi family. So in other words, Ruto was accusing Gideon Moi of desperation.  We hope the Baringo Senator will respond to these allegations.

I am sorry to let you know that my colleague https://t.co/wimoj87AjT has cancelled my appearance at KTN #CheckPoint Tonight. I have always supported media freedom in Kenya. Unfortunately the struggle between media ownership &editorial independence is real….. pic.twitter.com/CIQT29fWRt

A letter, allegedly from The Standard group, has been circulating on social media distancing the newspaper from viral airport story.

“The story is inaccurate, fake and with a lot of propaganda. It does not reflect the Editorial Policy of The Standard,” reads part of the letter whose origin has not been substantiated. 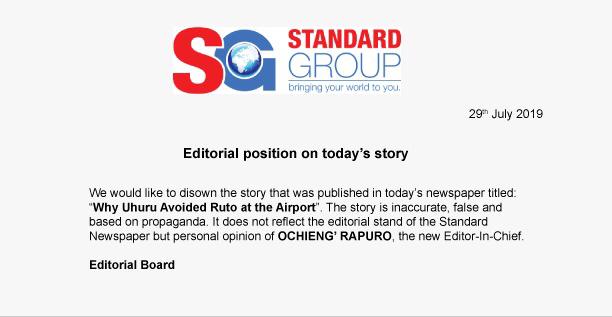 It didn’t take long for The Standard Media Group to issue a statement on this ‘apology letter’ and as some of us expected, called it out as fake and urged their audience to help them in combating fake news.

Our attention has been drawn towards this letter circulating on various social media platforms with regards to a story done by The Standard. We urge our loyal audience to dismiss the letter as fake and support us in combating fake news.#GetTheWholeStory pic.twitter.com/PkMApr7wyN

Ruto’s office has recently been on the spot for fake letters. One was about an alleged murder plot against the second most powerful man on the land. Dennis Itumbi has already been charged in court over the fake letter and some Kenyans believe he could be the one behind this from Standard.

It seems we are in for more political drama this week. Remember, it is still Monday.