English Premier League side Arsenal has promoted two youngsters to their first team squad for next season. Unai Emery’s team is currently in London Colney preparing for pre-season which starts next week. The club has so far signed only one player, a 17 year Old Gabriel Martinelli from Brazil.

On Monday, Arsenal confirmed the promotion of midfielder Joe Willock and striker Eddie Nketiah to the first team. Joe Willock featured 17 times for the Gunners last season and scored 3 goals while also featuring in the Europa League defeat to Chelsea in Baku. The midfielder is expected to replace Aaron Ramsey’s role in the Arsenal midfield and has been handed the #28 jersey.

Eddie Nketiah is expected to fill the Danny Welbeck role in the squad and has been handed the #30 jersey.

Nketiah, who, like Willock, signed scholarship terms with the club four years ago, has so far scored three goals in 19 first-team appearances for Arsenal.

Previously on Chelsea’s books, Nketiah, an England youth international, has scored with regularity for Arsenal at academy level in recent seasons and was named on the bench for the first-team on many occasions last campaign. 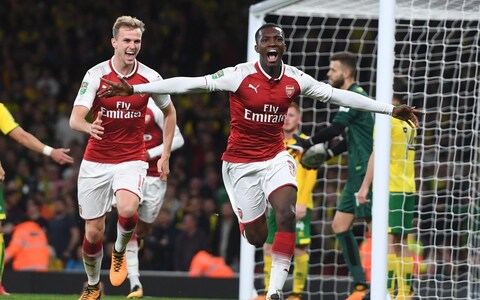 Unai Emery’s side will fly to the United States on Thursday this week ahead of the official pre-season tour which starts on the 15th of July. Below is the full list of Arsenal’s pre-season fixtures…