Kenya’s number one goalkeeper Patrick Matasi has received a lot of praise from Kenyans after his commendable job on Monday night against Senegal. Kenya headed to the match as underdogs and Senegal proved this by edging them 3-0 but it could have been much were it not for the impeccable saves by Matasi. 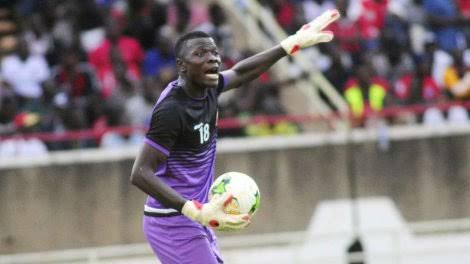 Matasi pulled a huge save in the 22nd minute to deny Senegal. M’baye Niang danced his way into Kenya’s penalty area before unleashing a bombshell that Kenya’s keeper blocked using his feet. He followed it with another point-blank fantastic save to deny Gueye Gana.

The most notable moment was in the 27th minute when Senegal was awarded a penalty after Saliou Ciss stormed into the area and went down from the slightest contact from Musa Mohamed. Liverpool forward Sadio Mane stepped forward to take but once again Matasi stood tall by going to the right to keep scores barren.

The Lions of Teranga continued with their raid and Kenya’s defense remained intact but Matasi rescued Stars again by denying Ismaila Sarr’s header with a finger-tip save just before halftime. He ensured the first stanza ends goal-less.

Matasi was called into action again in the 52nd minute to deny Henri Saivet by saving his thunderous shot. He again denied Niang from close range in the 59th minute taming his ferocious drive.

Frankly, Matasi did a wonderful job for the Kenyan side as according to statistics, the Mane-led team made ten shots but the Kenyan goalkeeper saved most of them.

Kenyans stormed social media, for that reason, to shower praise to the 31-year-old for the great job.

Thank you #HarambeeStars for giving your best. We live to fight another day. Let’s build on the #AFCON2019 experience for future tournaments. Great effort by Patrick Matasi.

You all have to see this, Sadio Mane penalty saved by our very own Patrick Matasi. This guy deserves a HSC.#KENSEN #TotalAFCON2019

The best goalkeepers in the world in ascending order.

The reason why Matasi is better than De Gea and Leno combined. https://t.co/N3hu8a5Lw3