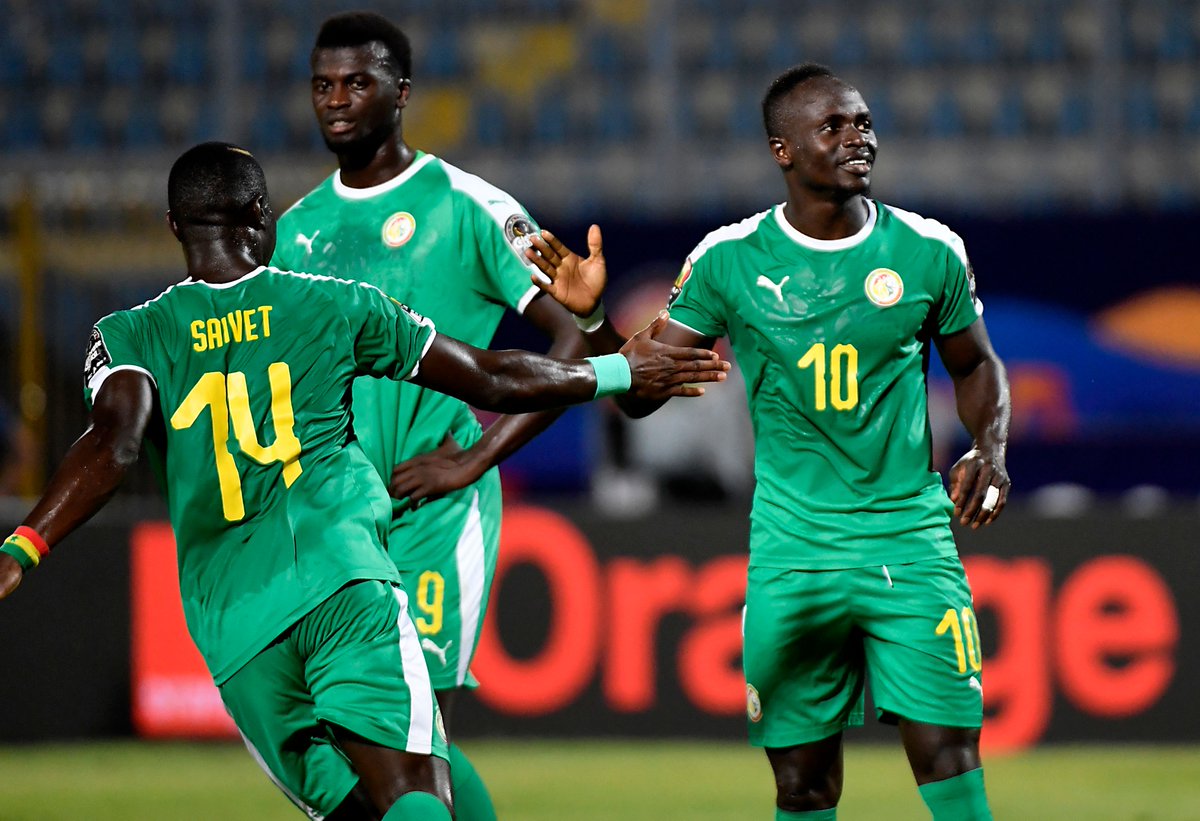 Second half goals from Ismaila Sarr and Sadio Mane helped Senegal whip Kenya 3-0 in an African Cup of Nations group C match at the Air Defence Stadium in Cairo on Monday night.

Kenya keeper Patrick Matasi pulled numerous saves in the game including one from the penalty spot but Kenya eventually ran out of luck as the Lions of Teranga scored three second half goals to pick maximum points. Kenya finished the game a man down after Philemon Otieno was sent off for a second booking.

The first clear-cut chance of the match went Kenya’s way in the eighth minute when Michael Olunga latched onto a back pass from a Senegal defender but his looped finish went over the bar with Senegal keeper Gomis Amigo out of his goal area. Erick Ouma got another chance in the 14th minute but his right-foot attempt went embarrassingly over the bar.

Senegal slowly took control of the game and Harambee Stars were fortunate not to concede a penalty in the 29th minute when Victor Wanyama handled the ball in the penalty area. The referee dismissed Senegal’s pleas for a penalty and Kenya survived.

Now in control of the game, Patrick Matasi pulled a huge save in the 22nd minute to deny Senegal. M’baye Niang danced his way into Kenya’s penalty area before unleashing a thunderbolt that Kenya’s keeper blocked using his feet. He followed it with another point-blank fantastic save to deny Gueye Gana.

Senegal’s endless raids saw Kenya concede a penalty in the 27th minute. Saliou Ciss stormed into the area and went down from the slightest contact from Musa Mohamed. Liverpool forward Sadio Mane stepped forward to take but once again Matasi stood tall by going to the right to keeper scores barren.

The Lions of Teranga continued knocking at Kenya’s rear-guard with Kenya now on the defensive trying to deny Senegal. Matasi was at it again denying Ismaila Sarr with a finger-tip save just before halftime. The first stanza ended goal-less.

Senegal continued to run the show after the break, once again Matasi was called into action in the 52nd minute to deny Henri Saivet by saving his thunderous shot. He again denied Niang from close range in the 59th minute taming his ferocious drive.

Against the run of play, Kenya nearly took the lead with a ferocious snapshot but Amigos was equal to the task parrying the shot for a corner.

Senegal went ahead in the 63rd minute, Matasi parried a shot from the right flank and Sarr was well placed to bundle home.

GOAL! AFter many heroics, Patrick Matasi finally gives in to goal after miscommunication with Philemon Otieno aiding Ismaila Sarr to get the opening goal #AFCON2019 #KENSEN #KenyaVsSenegal pic.twitter.com/ttVvAQOhRT

Sadio Mane atoned for his penalty miss in the 71st minute when he capitalized on a Musa Mohamed’s defensive mistake to fire past Patrick Matasi to double Senegal’s lead. Things went from bad to worse for Kenya when Philemon Otieno brought down Ismaila Sarr in the area. A penalty was awarded and Otieno sent off for a second booking. Mane stepped forward and this time he made no mistake beating Matasi to make it 3-0.