Skip to content
Entertainment News
After the city controversial Pastor; Apostle James Ng’ang’a- Founder of Neno Evangelism Centre went viral for every wrong reason of embarrassing his bishops, people made every possible joke out of his words.

In a Video that went Viral on social media, Ng’ang’a was heard hauling insults to his assistants claiming that they were ‘stupid, rubbish, and arrogant.

He accused them of spreading rumours about his wife while they joined his church poor and desperate, and he made them rich.

These are some of the words that the controversial pastor used while threating to close down that churches he run by the bishops under Neno Evangelism Centre. He Sarcastically referred to the churches as Kiosks.

Kenyans never hesitate in making jokes around controversy and Ng’ang’as story was a very juicy source of jokes. Kenyans Came up with Before and after Neno challenge where they shared pictures to bring out the Transformations that Nga’ng’a imposed on his bishops.

This photo evoked all manner of reactions from her fans with some admiring her to a point of wishing to be with her. Here are some of the comments.

Am not the kind of guy who breaks a relationship but i always wish there were to of you.

Other celebrities who shared their Neno Challenge include; 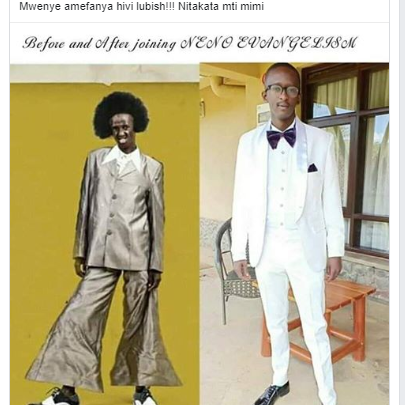