Barely a month after declaring his dramatic exit from William Ruto’s Tanga-tanga camp, Elgeyo Marakwet governor Engineer Alex Tolgos has hit the headlines once again after making a u-turn and declaring his support for his one-time ally and boss William Ruto.

He revealed that after associating himself with Gideon Moi and KANU errand boys for the few days he had been away from the camp, he lost many friends including his own relatives.

“For the last few months I associated with Gideon Moi(KANU) I lost many friends including my relatives.” Said Tolgos.

"For the last few months i associated with Gideon Moi(KANU) i lost many friends including my relatives. "Alex Tolgos.

In May this year, the soft-spoken governor whose second term in office will be coming to an end in 2022 announced his defection from Jubilee party in Particular William Ruto’s Tanga-tanga camp citing frustrations and insults from some of Ruto’s close allies including the county’s Senator Kipchumba Murkomen and William Ruto’s aid Farouk Kibet.

Tolgos who had been a close ally of William Ruto was elected on a Jubilee ticket after defeating independent candidate Moses Changwony. Tanga-tanga Leaders who were present at the function while welcoming Tolgos back to the camp maintained that President Uhuru Kenyatta will support William Ruto in 2022.

Elgeyo Marakwet Senator Kipchumba Murkomen who maintained he was speaking on behalf of Uhuru Kenyatta told off opposition leader Raila Odinga for invading and dividing Jubilee party. Murkomen rubbished the claims that President Uhuru Kenyatta will endorse Raila over Ruto in 2022.

The governor had come under heavy criticism from a section of Elgeyo Marakwet County leaders following his prior defection from William Ruto’s camp.  Led by Sambirir Ward MCA Nathan Kilimo, the leaders had distanced themselves from Tolgos’ defection terming it a personal decision which had no impact on William Ruto’s 2022 support from the region. 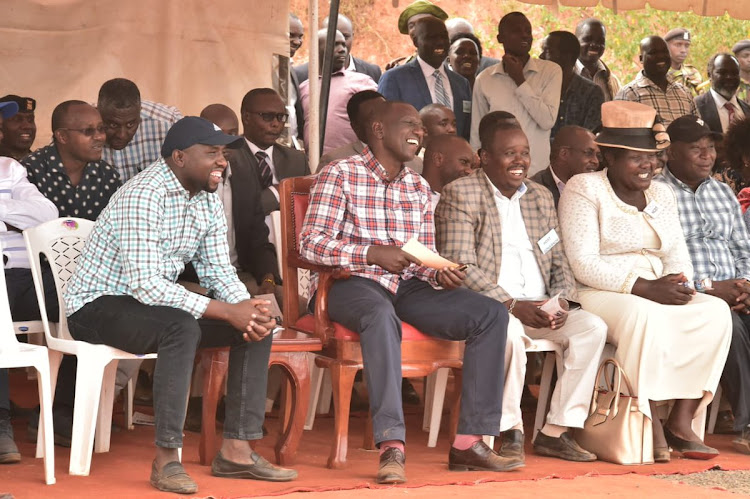 Kilimo made it clear that the governor had no support behind him terming his defection to KANU as an ill-informed decision that would come back to haunt the governor in the future. The leaders had accused him of dumping Ruto when he had helped him clinch the seat in 2017 against his close rival Moses Changwony an independent candidate who was threatening to de-throne Tolgos.

It is probably due to this immense pressure and rejections from his own people and the County’s top leaders that Tolgos made his U-turn decision to rally behind the region’s kingpin.

With this announcement, Tolgos has detached himself from the list of other leaders including Uasin Gishu Woman Representative Gladys Shollei, MPs Sila Tiren (Moiben), Joshua Kutuny (Cherangany) and Alfred Keter (Nandi Hills) who have recently shifted camp and are considered to have a soft spot for the Kanu leader Gideon Moi.