Deputy President William Ruto is a man currently walking on a tight rope after the recent political turmoil being experienced in his own backyard of Rift Valley threatened to derail his 2022 political ambitions.

Over the few months, his once considered political allies have slowly taken the back bench with others calling it over with Ruto and announcing their new political directions.

Elgeyo Marakwet county for years just like any other county in the populous Rift Valley region had remained under William Ruto’s controlled as far as political directions are concerned. Its leaders including Senate majority leader Kipchumba Murkomen, Elgeyo Marakwet governor Engineer Alex Tolgos together with other legislatures have been under Ruto’s Jubilee umbrella for long.

Arror and Kimwarer dams in Elgeyo Marakwet county are very well known to the Kenyan public after it came to light that the ambitious multi-purpose dams projected fronted by the Kerio Valley Development Authority (KVDA) may have been a channel through which taxpayers lost money.

In 2015, Deputy President William Ruto came under criticism from a section of Elgeyo Marakwet teachers who accused him of grabbing their 700 acres Sacco land at Jagir’s place in Eldoret and using part of 20 acres to build his palatial home.

These allegations of land grabbing didn’t go down well with the residents especially the Keiyo community who viewed the act as a target towards their marginalized sub-community. The issue, however, was kept under water in a move to protect the region’s kingpin from bad limelight.

With Buzeki’s recent installation as the community’s spokesperson, the whole issue is threatening to pop up again with Keiyo community elders accusing William Ruto of injustices and his failures to unite the Kalenjin communities.

“We have witnessed many injustices under the current leadership. Most of our leaders are fulfilling their personal interests while abandoning the common man.” said one of the elders Ismael Kiprop Koech.

Ruto, Buzeki rifts in the region are threatening to tear down the relationships between the two counties of Elgeyo Marakwet and Uasin Gishu with the Keiyo Elders vowing to stand with Buzeki in his gubernatorial bid telling off Ruto and his allies who are working hard to stop their son Buzeki in 2022.

The elders are now standing in solidarity with the Keiyo Teachers Sacco demanding justice for their land which was allegedly grabbed from them by powerful politicians in the Jubilee regime.  They questioned how Jagir and Elgeyo Saw Mills land found its way into the hands of private developers.

Buzeki together with the community’s elders have threatened to mobilize a massive walk out from the Jubilee party from the region f their concerns are not met and justice served.

To add water on the already slippery floor, the elders also dug into Kimwarer and Arror dam Scandals. They expressed their hunger over what they termed as stalled projects in the county accusing some of the powerful individuals inside Ruto’s camp for misappropriations.

Elgeyo Marakwet Governor Eng. Alex Tolgos who recently distanced himself from Ruto’s Tanga-tanga movement has once again urged the Director of Criminal Investigations DCI to finalise investigations into the 21 billion dam scandal 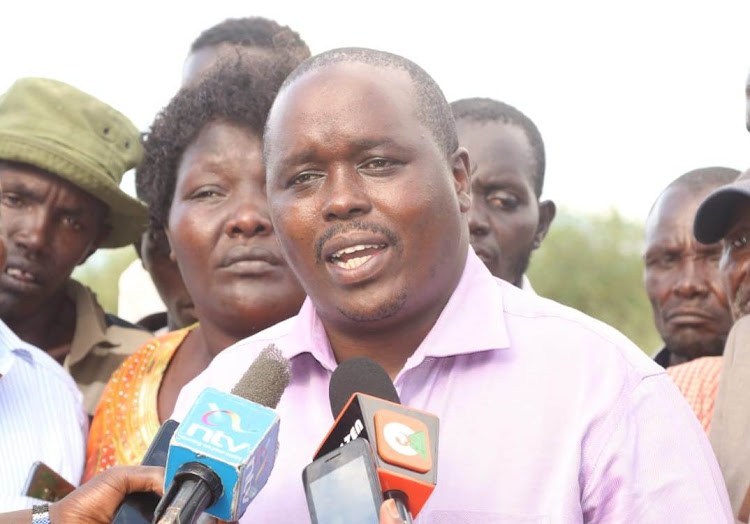 While commending the removal of David Kimosop as CEO of the troubled Kerio Valley Development Authority Tolgos said the projects had stalled because of some key individuals inside the Jubilee government in what was viewed as an indirect reference to Ruto’s close ally former KVDA CEO Kimosop.

It is upon William Ruto to move swiftly and calm the situation that is threatening to tear his home backyard into two. If Buzeki succeeds in pulling his Elgeyo Marakwet residents behind him and under CCM party, then William Ruto’s 2022 presidential bid will have suffered a major blow as every vote in the Rift Valley is so crucial for the Deputy President at the moment.