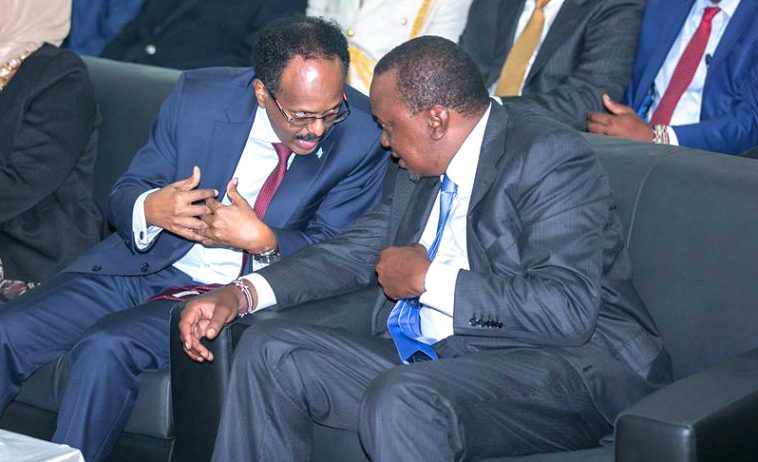 As the relationship between Kenya and Somalia escalates over the maritime border, President Uhuru has been urged to take precaution and stop the bilateral relationship with Somalia from sinking below the current level.

It is alleged that there are powerful forces against Kenya who might take advantage of the current situation and hurt our country.

Moses Wetangula who made the revelation has urged president a Uhuru Pr Uhuru should call their to visit Mogadishu and meet with the Somalia President to discuss the issue. According to documents, Kenya refers to its relationship with Somalia as that of Siamese twins sharing a common destiny.

“The issue is that the two countries not only share a common heritage but Kenya has continued to play the role of protector and defender of the interests of the peoples of Somalia since time immemorial,” the documents read

The narrow triangle off the coast of Africa, in the Indian Ocean, about 100,000 square kilometres (62,000 square miles), is the bone of contention between neighbouring Kenya and Somalia. Both countries want the area because it supposedly has a large deposit of oil and gas, but it’s not clear to which country it belongs.

Kenya military troops attached to AMISOM have started withdrawing from their military base as from March and headed back to Kenya.

With a weakened security infrastructure following the exit of the combined military forces(Kenya and the U.S), it is yet to be seen how the government of Somalia will meet the expenditure of its budgets including salaries for its officers.

Speculations are rife that criminal activities may re-surface to provide the badly needed cash that will hold the government together. The recent licensing of Chinese fishing vessels on Somalia waters as well as the auctioning of oil and gas blocks in the disputed maritime territory are believed to prepare the funding for election campaigns scheduled for 2020 thereby complicating an already delicate situation.

It can be assumed that the region is bound to witness an escalation of illegal activities such as piracy, money laundering, including wildlife crimes amongst the neighbouring Horn of Africa countries of Ethiopia, Eritrea, Somalia and Djibouti.

Kenya should be careful not to let our bilateral relationship with Somalia sink below the current level. Powerful forces against Kenya can take advantage and hurt our country. Pr Uhuru should call their bluff and visit Mogadishu & meet their President.

In total agreement sir. Kenya is caught up in a deadly ‘game of thrones’ of oil multinationals! She also risks being involved in the ongoing crisis among the gulf stated.