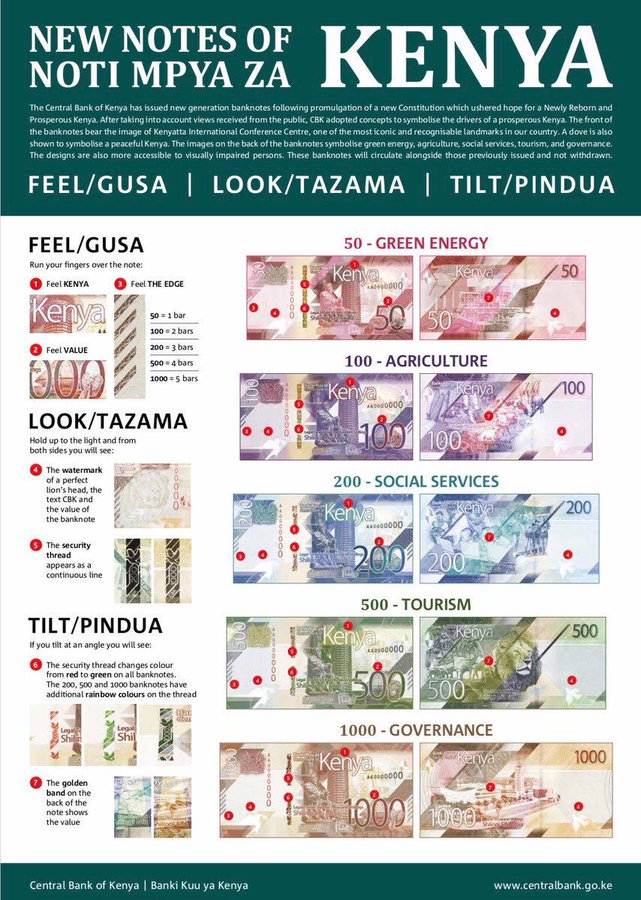 All corruption cartels who are rumoured to have huge amounts of money stashed under their pillows and home banks have until 1st October to use their money or they will become obsolete.

The government through the Central Bank of Kenya Governor Patrick Njoroge announced on Madaraka Day that notes had started circulation effective 31st May 2018. Njoroge launched the new generation banknotes on Saturday.

“All persons have until October 1 2019 to exchange Ksh 1000 bank notes for the new generation bank notes, after which the older notes will cease to be legal tender.” Mr. Njoroge said.

To determine the authenticity of the new notes, Kenyans are urged to hold up a note to the light and check for a watermark from both sides. The watermark is of a lion’s head and a security thread appears as a continuous line.

"All persons have until October 1 2019 to exchange Ksh 1000 bank notes for the new generation bank notes, after which the older notes will cease to be legal tender" ~ Central Bank of Kenya Governor Patrick Njoroge #MadarakaDay pic.twitter.com/uyD22NKfqB

According to the CBK guidelines: “If you tilt the angle, you will see the security thread changes colour from red to green on all bank notes. The 200, 500 and 1000 bank notes have additional rainbow colours on the thread.”

Governor @njorogep announces the unveiling of the New Generation Currency banknotes. Old generation one-thousand shilling banknotes will need to be exchanged by October 1, 2019, after which they cease to be legal tender. pic.twitter.com/iyy1lpaKuy

There have been allegations of mega corruption in the country with people accused of stashing billions of money in their homes.

They will now have to take the money to the bank. This means that if you have one billion shillings of money in your home, then you will have to explain the source of your money before exchanging them with the new currency.

If the directive is implemented, then it means that billions of stolen money is just about to become useless. Some Kenyans have however argued that the period is still so long and the cartels will find a way of cleaning their money.