The details are contained in an affidavit by Ethics and Anti-Corruption Commission (EACC) detective Regina Ng’ang’a, which was Thursday filed before Kiambu principal magistrate Brian Khaemba, in response to an anticipatory bail issued last week.

Two companies the commission said are owned by the three, received up to Sh 30.6 million from a firm awarded a tender to construct roads late last year and early this year.

The affidavit claimed that the governor and some of his relatives received money through Saika Two Estate Develop, a company he owns with his daughter; Bienvenue Delta Hotel belonging to him and his wife, as well as Connex Logistics Africa, which is owned by his wife. 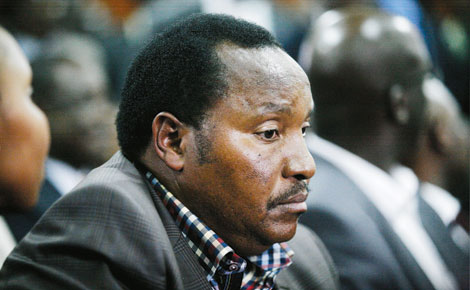 Investigations showed that the company’s account was opened on March 27, last year by its managing director Charles Chege and Beth Wangechi Mburu, being the directors.

The commission said this emerged during an analysis of statements received from an Equity Bank account held by Testimony Enterprises Limited. It showed numerous transactions on various dates.

The investigator told court their inquiries from Registrar of Companies revealed Waititu and his daughter are the directors of Saika Two Estate Developers Limited.

Earlier while addressing a rally on a Sunday at Makutano center in Trans Nzoia County, the governor stated that ,“They are lying on Facebook that my daughters have millions in their accounts but that is a lie… they’re saying I have over 50 bank accounts, but all those are lies”.