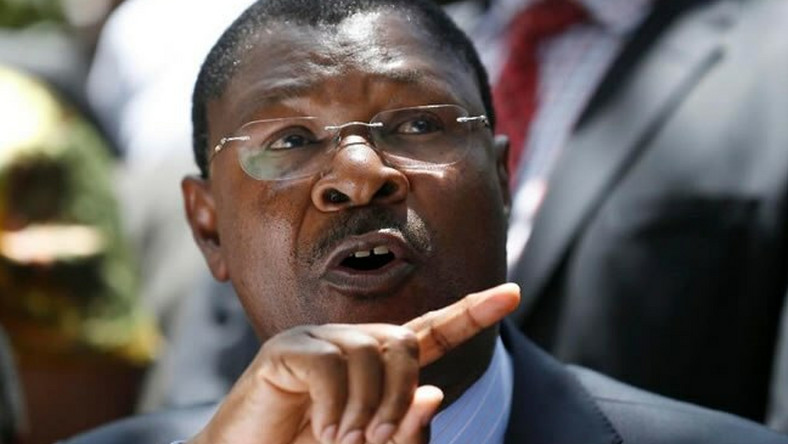 The media has lately been awash over the fake gold scandal that saw the ruler of United Arab Emirates Sheikh Mohammed bin Rashid Al Maktoum lose millions of shillings.

Bungoma Senator Moses Wetangula who is alleged among the main suspects in the scandal has now spoken for the first time made a public appearance where he took the golden opportunity to respond to the scandal accusations.

“There are reports that you have been summoned at the DCI over the fake gold scam, what do you have to say about that?” question posed.

In response, Wetangula stated that he was not aware of the matter, refusing to divulge more information on it.

“I am not aware of what you are talking about, it is a non-issue to me and I don’t want to engage in it,” he conveyed.

On his planned questioning by the DCI, the Senator stated that his itinerary did not have any meeting with the sleuths.

“From my itinerary, I am going to console with the family of Fredrick Oduya Oprong, then I’ll be at a committee meeting in the Senate and in the afternoon I’ll be in the plenary debating issues of national interest,” he added

An attempt by another journalist to get clarification was met by the same ‘non-issue’ comment before the Senator left the podium signaling the end of the presser.

Wetangula, whose supposed audio was leaked to the public two weeks ago, has grievously been implicated in the scandal.

In the undated phone conversation, Wetangula was heard assuring the representative of the ruler, whose cargo was being held by the government under Interior security ministry that all will be well.

He was also heard telling the gold scammer that the ODM party leader Raila had met President Kenyatta over the cargo, and that it would be released soon.

Mr Odinga revealed that he had travelled to the United Arab Emirates (UAE) and met its ruler Mohammed bin Rashid Al Maktoum in Dubai over the scam, which has sucked in the names of President Uhuru Kenyatta and Interior Cabinet Secretary Fred Matiang’i.

“I told the royal ruler that the voice he heard on phone was not that of the minister. I know Matiang’i’s voice and the callers were simply using it to advance their agenda,” said Mr Odinga.

“Matiang’i is as clean as a whistle on this fake-gold saga. Leave him alone,” he added.

Mr Odinga spoke on the eve of fellow opposition leader Moses Wetang’ula’s return to Kenya from an official trip to Hong Kong where he claimed that his role in the scandal was just whistle blower.